Is Masdar City a ghost town or a green lab? 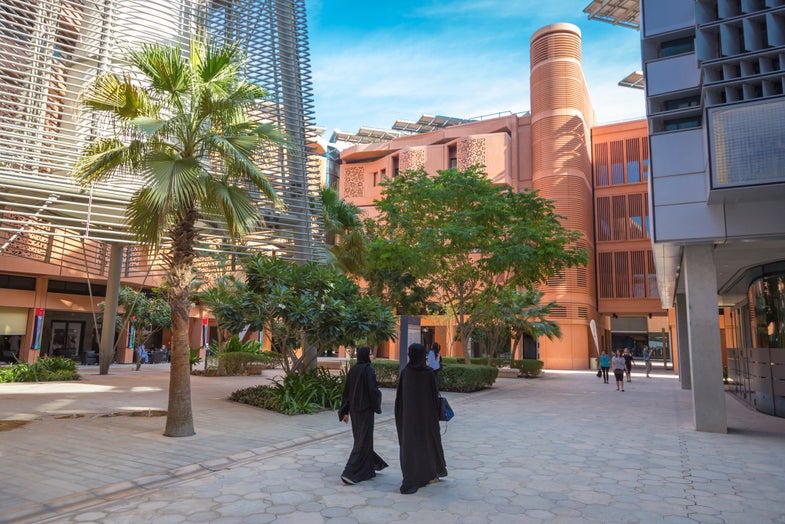 Between the Abu Dhabi airport and an enclave of suburban villas is a neatly delineated, 2.3-square-mile plot of…mostly desert. It’s not quite a mirage, but it is a work-in-progress: Masdar City, the most ambitious—and expensive—urban planning experiment on the planet today. Abu Dhabi, the largest and richest of the United Arab Emirates, first announced the project in 2008. Masdar City was to be the first-ever human settlement with no negative environmental impact—zero waste, zero carbon, car-free, fed by recycled water. But even Abu Dhabi’s famous oil reserves—which power a nearly trillion-dollar sovereign wealth fund, the Abu Dhabi Investment Authority—were not immune to the global financial crisis that rocked the world economy that same year. Even as the government-funded Masdar Initiative first broke ground on the city more than a decade ago, its dimensions had already begun to change.

WANT TO SEE IT? Take a trip with Popular Science editors!

Green is not the first color that comes to mind when thinking of the United Arab Emirates. Postcards advertise pale gold, the shade of its vast desert interior, and turquoise blue, the tint of its warm Gulf waters. Economic and political coverage evoke the glossy black of crude oil. But the UAE, governed by a federation of absolute monarchies, is remarkably cognizant of the limits of their fossil fuel resources as well as the steep price those resources exact on the global climate.

Abu Dhabi has “a more conservative and low-key approach to its development,” explains Syed Ali in his 2010 book, Dubai: Gilded Cage, “in contrast with Dubai’s flashy,” headline-grabbing projects. But while the two emirates have diverging styles of development, both are focused on diversifying their economies: keenly aware how easily cars can be replaced with camels.

Today, green technology is a major component of the UAE’s plan to transform their singular, oil-focused economy to a heterogenous, knowledge-based one. It’s why Masdar aims “to be a model for the commercial adoption of clean technologies,” as the company explained in an official statement. Stakeholders want Masdar City to become “a ‘greenprint’ for sustainable urban development.”

But more than 10 years after construction began, most of Masdar remains empty—a lot of sand.

As originally designed by London architecture firm Foster + Partners in 2007, Masdar City anticipated up to 50,000 new residents within a decade. Today, that number is closer to 1,300—most of whom are students at Khalifa University of Science and Technology (formerly the Masdar Institute) and living in on-campus housing. Masdar City’s ecological aims have also shifted.

Today it works toward being a carbon neutral, rather than a carbon free, settlement. Much of the energy used in Masdar City’s construction was produced by fossil fuels rather than by its on-site solar panels. It’s revolutionary underground Personal Rapid Transit system, or PRT, lay long dormant after only two stations—out of a planned 1,500—opened. The city has only recently restarted work on the project.

“The PRT costs a fortune,” explained one Masdar Initiative manager to urbanism scholar Federico Cugurullo in a 2018 Economy and Space article, “and Masdar City is not an environmental crusade.” Science and technology experiences handpicked by the editors of Popular Science. From South Africa to China to Egypt to Dubai, you’ll experience these bucket-list destinations alongside a Popular Science writer or editor.

Go on a PopSci Expedition

Another defended the project’s attention to the bottom-line. “Actually it is very good if you treat [Masdar City] as a business. If you can’t make money it is not sustainable.”

Created to help propel Abu Dhabi beyond its petroleum-based economy, Masdar City can only be as environmentally friendly as it is profitable. Masdar City is an “eco-city,” argues Cugurullo in a 2016 Urban Studies article, where ‘eco’ “does not stand for ‘ecological’ but for ‘economic.’”

Cugurullo, who has written extensively about Masdar, describes the city instead as a lab or a showroom rather than a home. When Mitsubishi installed the first rapid electric car chargers in the Middle East in Masdar in 2012, it used the urban landscape as both.

“The business is real,” Cugurullo says a 2013 Journal of Urban Technology article, but the city itself is not. It’s more of a showpiece and an experiment.

Still, it’s not like the 2 square miles of sand is totally empty.

Stakeholders boast that the city’s development is more rapid than ever. In 2008, the Abu Dhabi government foot the entire bill for Masdar City, today it is funded primarily by third-party investment—something seen as a major success. The city’s expanding collection of solar panels, including a 10-megawatt (MW) solar array as well as 1MW rooftop solar panels, can power Masdar City’s current energy usage six times over. While much of what Masdar City promises has been slated for an undetermined future—in space yet to be built, leased, or occupied—its projections are noticeably more modest than in 2008. Rather than 50,000 residents by 2018, they now speak of 3,500 by 2020.

But Cugurullo urges Masdar City to rethink its business-only focus, Without a more cohesive view of what an eco—as in ecological—city could look like, “Masdar City will remain a non-place and quickly turn into a ghost-town.”

When asked about his favorite part of the city, Cugurullo describes the downtown area, one of the few parts of the originally 2008 plan built according to plan. Designed for pedestrians, roads are narrow and shady—angled in a way to catch the wind that moves between the Gulf and the desert. As a result, it’s a streetscape that needs neither cars nor air conditioning.

While this feels innovative, it’s based on the plans of old Arabic cities such as Aleppo, in Syria, and Shibam, in Yemen. “This is pure sustainability without any high-tech device,” says Cugurullo. “Just traditional urbanism dating back to many centuries ago.”

This story was written in part to promote our PopSci Expeditions, which are science and technology experiences handpicked by the editors of Popular Science. Want to know more? Head right this way.