Farming in the Sky

Agriculture is broken. Traditional techniques use too much energy and produce too little food for our growing planet. One fix: skyscrapers filled with robotically tended hydroponic crops and lab-grown meat 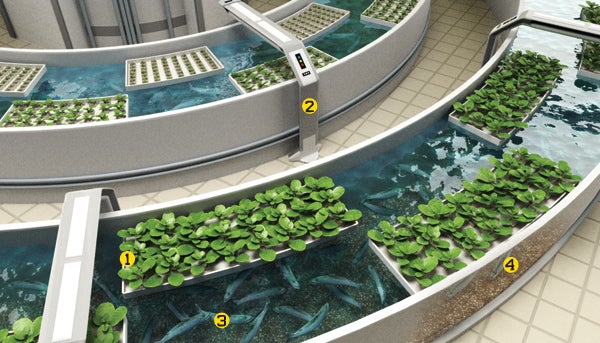 By 2025, the world’s population will swell from 6.6 billion to 8 billion people. Climate simulations predict sustained drought for the American Midwest and giant swathes of farmland in Africa and Asia. Is mathematician Thomas Malthus’s 200-year-old prediction, that human growth will one day outpace agriculture, finally coming to pass? Advances in farming technology have kept us fed so far, but the planet’s resources are tapped.

The choice is clear—rethink how we grow food, or starve. Environmental scientist Dickson Despommier of Columbia University and other scientists propose a radical solution: Transplant farms into city skyscrapers. These towers would use soil-free hydroponic farming to slash demand for energy (they’ll be powered by a process that converts sewage into electricity) while producing more food. Farming skyward would also free up farmland for trees, which would help remove carbon dioxide from the atmosphere. Even better, vertical farms would grow food near where it would be eaten, thus cutting not only the cost but the emissions of transportation. If you include emissions from the oil burned to cultivate and ship crops and livestock in addition to, yes, methane from farm-animal flatulence, agriculture churns out nearly 14 percent of the world’s greenhouse-gas emissions.

You can’t buy vertically grown groceries just yet. Most urban farming efforts have been small-scale experiments run in neighborhood parks. Despommier’s vision is bigger: a $200-million, 30-story tower covering an entire city block, stuffed with enough fruit, vegetables and chickens to feed 50,000 people. “With waste in and food out, a vertical farm would be like a perpetual-motion machine that feeds a lot of people,” he says. Most of the technology already exists, he adds, and with some refining, the project could be up and running quickly if granted 0.25 percent of the subsidies paid to American farmers in the past decade—a piddling $500 million.

Despommier is advising investors in Abu Dhabi and South Korea who are considering vertical farms for new eco-cities. Seattle and Las Vegas are investigating similar, smaller concepts. Turn the page to explore the farm of the future, inspired by cutting-edge research from agricultural companies and scientists. With any luck, it will help repel the Malthusian catastrophe for another 200 years.

Turn the page to see how the vertical farm works, and launch the gallery here for a floor-by-floor breakdown.

This automated “conveyor belt” system, conceptualized by
OrganiTech, an Israeli company that creates automated farming systems, takes aquaponics one step further. The tank’s slow current carries floating trays of plants [1] past nutrient dispensers [2] and, by the end of the weeks-long trip, the plants are ready for harvest. Below them swim high-protein tilapia [3], whose ammonia-laden waste sinks to a gravel bed [4], where bacteria convert it to nitrogen. The system pumps this nitrogen-rich water to the plants, which consume the nitrogen and return clean water to the fish. 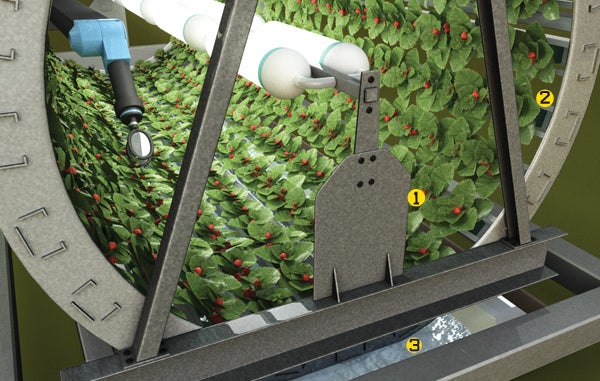 Farmers already score per-acre yields using hydroponic tactics that are 30 times as high as those produced by traditional farming. In a vertical farm, nutrient-delivery machinery and 24-hour light exposure would improve on that yield many times over.

But not all plants respond well to hydroponic methods. Some, such as potatoes and citrus trees, need to set root in a semisolid medium, like soil or coconut fiber. The design here, by the Canadian company Omega Garden, does just that. In this Ferris-wheel-like growing system, plants grow in porous, vermiculite-stone-filled trays [1] arranged in a cylindrical cart [2] that rotates to periodically dip each row of plants in a nutrient trough [3]. 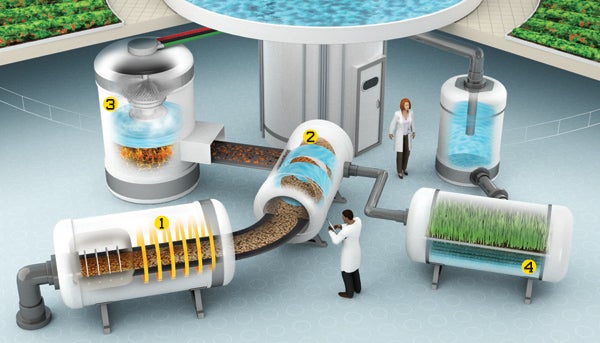 THE WHOLE THING RUNS ON SEWAGE

The vertical farm is more than just a produce factory. It’s also a plan to rewire a city’s infrastructure to mimic natural-resource cycles. Nowhere is that more evident than in the tower’s basement, where sewage provides the farm’s most crucial resources: energy and water. The surrounding city’s sewage system would be redirected to the farm, where half of it would enter a “SlurryCarb” machine, developed by EnerTech, a green-energy start-up in Atlanta. The device heats and pressurizes the sludge [1], breaking it down into its base components—carbon and water. The machine extracts the water [2], and the solid, coal-like slurry burns to power steam turbines [3] that generate electricity. The rest of the sewage is treated with bacteria-killing chemicals and turned into topsoil through a heating and drying process developed by N-Viro, an Ohio-based biosolids-recycling company. Water extracted from both processes is filtered [4] through natural “bioremediators,” such as zebra mussels, cattails and sawgrass, that clean it until it’s suitable for agriculture, or further refine it for drinking. Any farming waste is composted to make fertilizer and methane gas, which can be burned for energy.

Launch the gallery here for a floor-by-floor breakdown.