It's a smart way to make propellent that cuts back on carbon-intensive processes in flying. 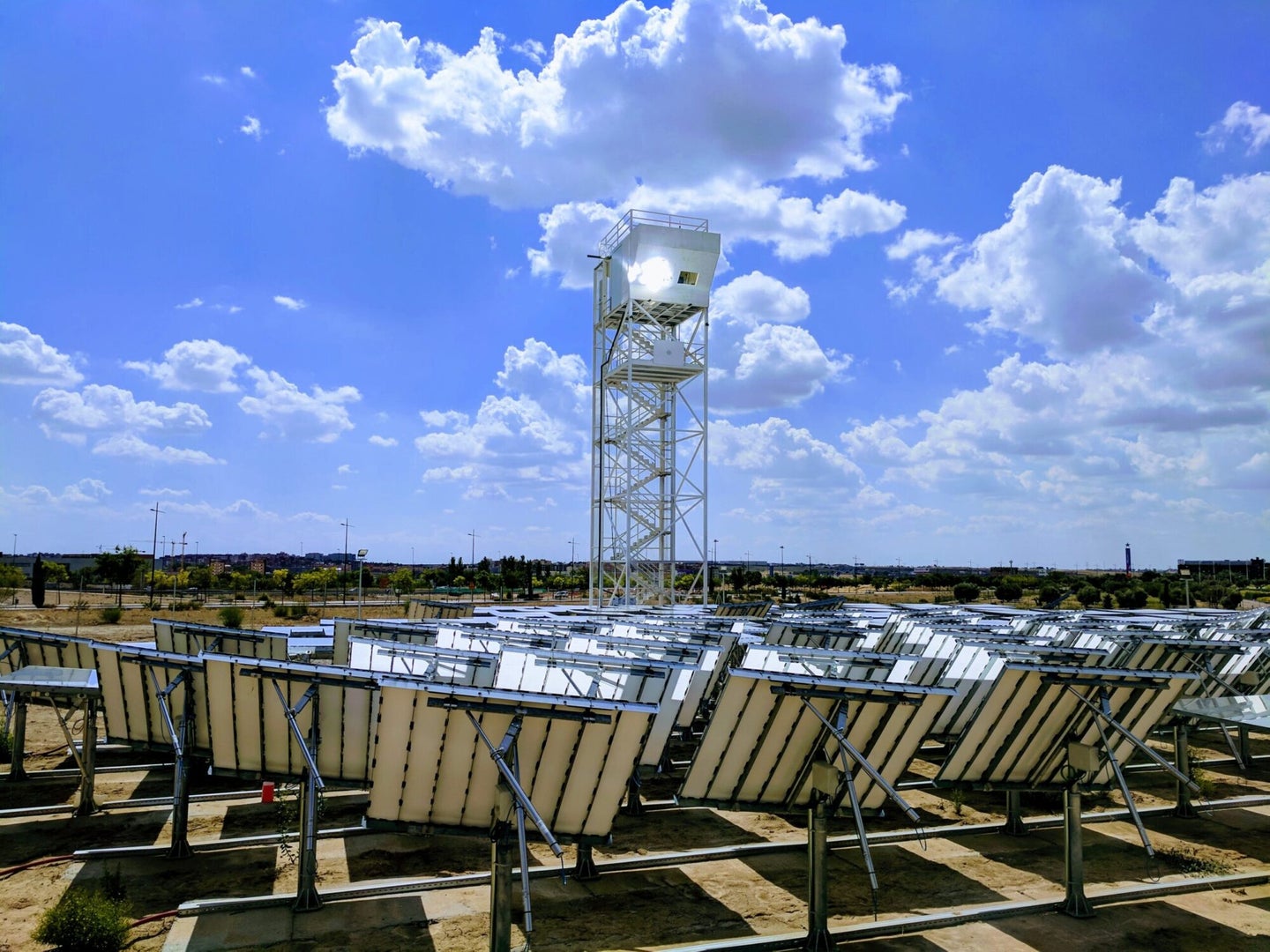 Sunlight focuses on a ceramic box atop the solar tower in Madrid. ETH Zurich
SHARE

At first glance, you might think the structure tucked away in a Madrid suburb is a solar power plant. Perched in an industrial park, the facility features an audience of solar reflectors—mirrors that concentrate blinding sunlight to the top of a tower.

For the past several years, researchers from several different institutions in Switzerland and Germany have been using it to test a method to create propellant—normally a carbon-intensive process involving fossil fuels—using little more than sunlight and greenhouse gases captured from the atmosphere. They published their results in the journal Joule today.

What happens inside their tower is a bit of chemistry known as the Fischer-Tropsch process. Under certain conditions, hydrogen gas and carbon monoxide (yes, the same toxic gas from vehicle exhaust) can react. They rearrange their atoms into water vapor and hydrocarbons. Those carbon compounds include diesel, kerosene, and other fuels that you might otherwise produce by dirtying your hands and refining petroleum.

Though the tower is new, the underlying process isn’t a recent invention; two chemists—named, naturally, Fischer and Tropsch—pioneered it in Germany nearly a century ago. But it’s historically been something of an afterthought. You need some source of that carbon monoxide: typically coal, natural gas, or their byproducts. It’s useful if you have limited access to petroleum, but less helpful if you’re trying to clean up the transport sector.

[Related: All your burning questions about sustainable aviation fuel, answered]

Now, with the intensifying climate crisis kindling interest in cleaner fuels, there’s growing demand for alternate carbon sources. Biological waste is a popular one. This plant takes a different approach: capturing carbon dioxide from the atmosphere.

That’s where 169 solar reflectors beam sunlight into the picture. Atop the 50-foot-tall structure, their light—on average, 2,500 times brighter than the sun—strikes a porous ceramic box made from cerium, the rare-earth element number 58. That draws water and carbon dioxide from the air and splits their atoms into hydrogen gas and carbon monoxide.

“We have been developing the science and technology for more than a decade,” says Aldo Steinfeld, an engineer at ETH Zürich in Switzerland and one of the paper authors. Steinfeld and his colleagues had first demonstrated the box method in the lab in 2010. By  2017, they’d begun building the plant.

In that plant, the newly created gases sink to the bottom of the tower, where they enter a shipping container that carries out the Fischer-Tropsch reactions. The end result is fossil-fuel-free kerosene, produced by pulling carbon dioxide from the air. The researchers say it can be pumped into fuel tanks, today, without issue.

Before the global pandemic, aviation accounted for less than 3 percent of the world’s carbon dioxide emissions. Land vehicles, in contrast, spewed out more than six times as much. But, while we’ve already started to replace the world’s road traffic with electric cars, there just isn’t a viable alternative for aircraft yet.

So the aviation industry—and governments—are trying to focus on alternative sources, such as biofuels. Though their exact timeline is still up in the air, European regulators may require non-fossil-fuel sources to provide as much as 85 percent of the fuel pumped at European Union’s airports by 2050.

In this environment, the Fischer-Tropsch process has entered the stage. Last year, a German nonprofit named Atmosfair opened a plant near the Dutch border that produces synthetic kerosene. It relies on a complex interplay of solar electricity and waste biogas to get its chemical components. Since the Atmosfair plant opened, it has produced eight barrels of kerosene a day: barely a drop in the 2.3-billion-gallon bucket that the world used in the year 2019.

The solar kerosene planet in Spain follows in its footsteps, though Steinfeld says the sun makes getting hydrogen and carbon monoxide much simpler. Still, just like Atmosfair’s plant, it’s only an early drop. “The facility is relatively small compared to a commercial-scale one,” says Steinfeld. But he and his colleagues believe that it’s an important demonstration.

[Related: Floating solar panels could be the next big thing in clean energy]

According to Steinfeld, meeting the entire aviation’s sector would require solar kerosene plants to cover an area of around 17,500 square miles, roughly the size of Estonia. That does sound large, but Steinfeld looks at it differently: A relatively small parcel of a sparsely inhabited hot desert could supply all the world’s planes.

(There’s precedent for something like it: Sunny Morocco has already become a solar power hub, and the country is planning to export some of that power to relatively cloudier Britain.)

For now, Steinfeld says the next steps are to make the process more efficient. Right now, a meager 4.1 percent of the solar energy striking the ceramic box actually goes into making gas. The researchers think they could considerably boost that number.