May Was The Hottest May On Record 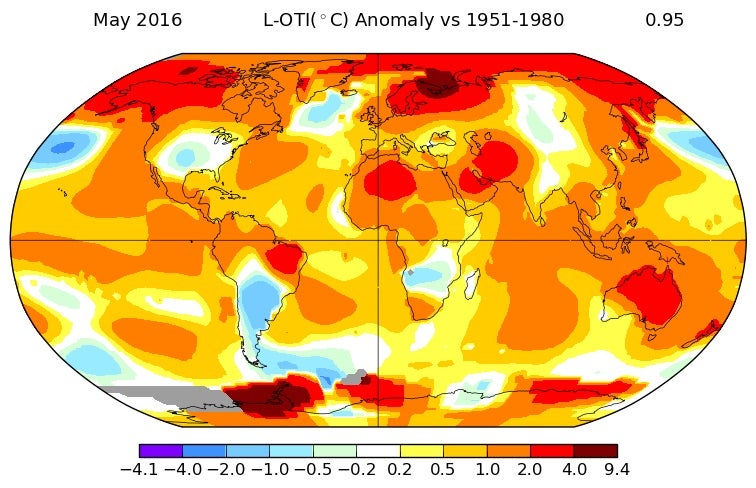 NOAA’s official global state of the climate report won’t be out until Friday, but this news officially sucks.

According to new data released by NASA on Monday, May was the hottest May since record-keeping started in 1880, with average temperatures 1.674 degrees Fahrenheit above what is considered normal. NASA considers “normal” to be the average temperatures recorded around the world between 1950 and 1981.

If confirmed on Friday, this news marks the 13th consecutive month that the monthly average temperatures have broken records, putting 2016 on track to be the hottest year since 2015, which which broke the record set by 2014 by a huge 0.23 degrees Fahrenheit.

More information will be available once NOAA releases its statement on Friday, but based on the NASA data, it looks like the world managed to keep up its record-breaking streak despite relatively average temperatures in the lower 48 states. Alaska, on the other hand, just experienced its warmest spring ever recorded, with average temperatures of 32 degrees Fahrenheit. That might be freezing to the rest of us, but for an Alaskan spring, it’s unusually warm.

In the interest of expediency, from now on we’re going with a standard formula for stories about monthly records (TK is a journalism notation for ‘to come’ and serves shorthand for ‘insert information here’):

TK MONTH Was The Hottest TK MONTH On Record

According to new data released by TK AGENCY on TK DAY, TK MONTH was the hottest TK MONTH on record since record-keeping started in 1880, with average temperatures TK DEGREES FAHRENHEIT above what is considered normal. TK AGENCY considers these normal temperatures to be TK BASELINE DESCRIPTION

This news marks the TK NUMBER OF DOOM consecutive month that the monthly average temperatures have broken records, putting TK YEAR on track to be the hottest year since TK YEAR-1, which broke the record set by TK YEAR-2 by a huge TK TEMPERATURE DIFFERENCE.

TK THIS IS REALLY HORRIFIC.

Hopefully, we will never use this formula again. But somehow, I think you’ll be seeing this when the June numbers roll in. Let’s hope I’m wrong.