Prototype Retainer Could Help Hearing-Impaired ‘Listen’ With Their Tongues

Putting the words right in your mouth 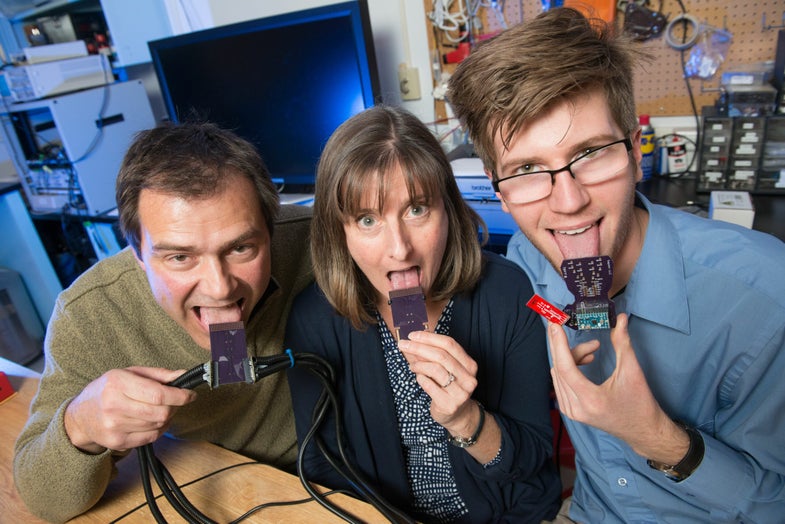 For individuals with significant hearing loss, cochlear implants have proven to be an incredible tool for regaining some sense of sound. Yet the small, electronic device, which works by stimulating an individual’s auditory nerve, requires both surgical implantation and a hefty wallet. (The combination of the device and insertion procedure can cost upwards of $40,000.)

Now, in the quest to find more practical solutions for the hearing impaired, researchers at Colorado State University are turning to an unlikely organ for help: the tongue. The three-person research team has developed a Bluetooth-enabled microphone earpiece along with a smart retainer that fits on a person’s tongue. The two devices work in tandem to strengthen a partially deaf person’s ability to recognize words.

Make no mistake: The tongue is not some magical conduit to the organs in your ear. The retainer/earpiece system works by reprogramming areas of the brain, helping them to interpret various sensations on the tongue as certain words.

“It feels like having champagne bubbles or Pop Rocks on your tongue.”

The process starts with the earpiece’s microphone, which takes in sounds and words from the surrounding environment. A processor converts these sounds into distinct, complex waveforms that represent individual words. The waveforms are then sent via Bluetooth to the retainer, where they are specially designed to stimulate the tongue. Utilizing an array of electrodes, the retainer excites a distinct pattern of somatic nerves (those related to touch) on the tongue, depending on which waveform it receives. The electrodes excite the nerves just enough to cause them to fire their own action potentials.

“Some people suggest it feels like the sensation of having champagne bubbles or Pop Rocks on their tongue,” mechanical engineer John Williams tells Popular Science.

According to Leslie Stone-Roy, one of the researchers on the team, the team chose the tongue because if its hypersensitive ability to discern between tactile sensations.

“We’re able to discriminate between fine points that are just a short distance on the tongue,” says Stone-Roy, assistant professor in the College of Veterinary Medicine and Biomedical Sciences at CSU. “It’s similar in terms of your fingertips; that’s why we use fingers to read Braille. The tongue is similar in that it has high acuity.”

With lots of time and practice, the retainer helps to strengthen the brain’s ability to recognize certain words. For example, every time the microphone hears the word “ball,” the retainer excites the same pattern of nerves on the tongue. Over time, the brain learns to associate that specific tongue sensation with the word “ball,” making it easier to recognize the word in the future.

The researchers compare their technique to the strategy behind reading Braille. With practice, a blind individual can learn to easily connect a pattern of bumps with a letter or word. It’s the same concept for their device, but instead of consciously memorizing which word matches up with which pattern, the brain subconsciously associates the various tongue patterns with the different sounds that are being uttered in real time. “We’re using sound information instead of symbolic information,” says JJ Moritz, a CSU graduate student and research team member.

The researchers note, however, that their device is best suited for individuals who are not completely deaf; that way the device can strengthen the faint sounds they are already capable of hearing. The researchers also addressed the big elephant in the room regarding the smart retainer: How do they keep it from electrocuting their patients?

“The power is very localized; we’re only running it at 5 volts right now,” says Moritz. “We run it with a 9 volt battery, so the worst that could possibly happen is that it’ll feel like touching 9 volts to your tongue. But we don’t send any current through your tongue.” 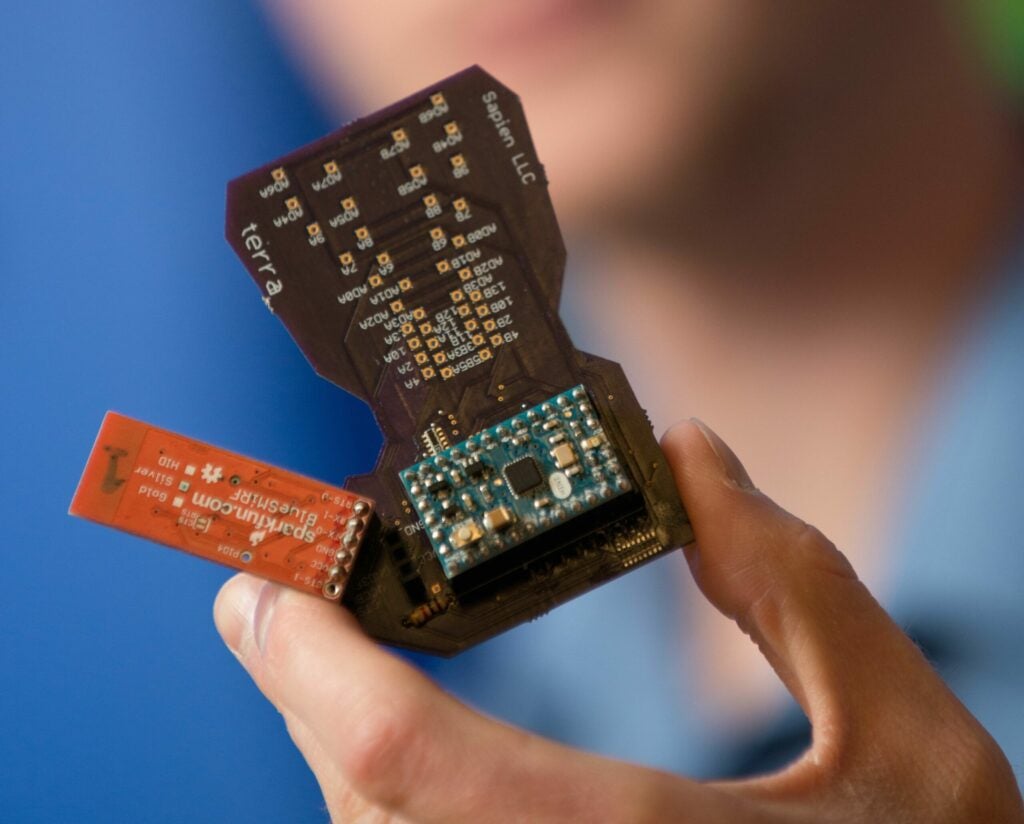 For now, the researchers are still perfecting their device and trying to map out all of the somatic nerves on the tongue. Then, they’ll work on scaling down the device and removing its wire, so that it can comfortably fit inside a person’s mouth. But once the system is complete, it could serve as a cheaper alternative to cochlear implants, costing somewhere around $2,000 (though the researchers didn’t specify what would keep the cost down). Additionally, no surgery is required for the retainer, which may make it favorable to those hesitant about going under the knife.

Plus, the team envisions applications beyond helping those with hearing loss. Moritz said down the road, they are interested in exploring language translation functions with their device. And auditory input isn’t the only sense that can be strengthened by the retainer. It can also improve a lost sense of touch.

“Let’s say someone lost their hand and you want to build a prosthetic for them,” Williams notes. “It would be interesting if we put touch sensors in the fingers and then stimulate the tongue [each time the hand touches something]. In a way, the brain is receiving the touch sensations on the end of this bionic hand. Sensory substitution is something the brain can do very quickly.”