A Celestial Evening At The White House 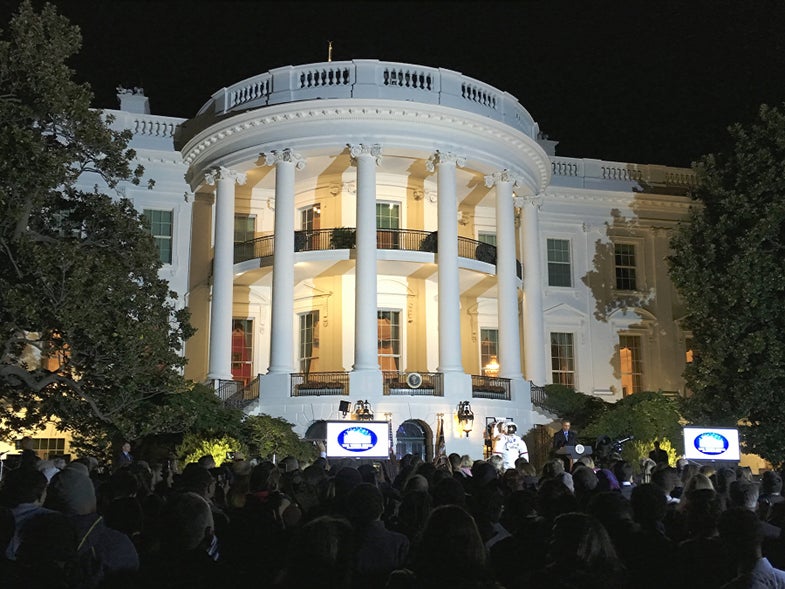 President Obama stooped to look through the eyepiece of a large telescope, then made an observation familiar to nearly everyone who’s looked through a telescope at the moon: “The image is inverted.” He was right, of course. It was inverted—and it was supposed to be. (The optics flip the image, but astronomers intentionally leave it that way; flipping it back means adding another lens, which would cost precious photons and make images fainter.)

The occasion that prompted the President to master telescope optics was the second-ever White House Astronomy Night. About 350 people gathered on the South Lawn after sunset, the familiar semicircle of columns stretching above. A band played “Summertime” as if to will away the 50-degree chill—I was very glad to have a hat and scarf with me as I stood on the lawn. But the evening was bright and clear, at least, with the fat crescent moon high above the horizon in the twilight.

Moon Above The White House

The attendees included a cadre of astronauts in blue jumpsuits—including John Grunsfeld and Mae Jemison—along with science celebrities such as Bill Nye the Science Guy and the Mythbusters. Even Ahmed Mohamed, everyone’s favorite clock-builder, was in the fifth row—he stood on his chair to snap a photo of the President approaching the podium.

Obama used the opportunity to announce a handful of new STEM initiatives designed to encourage students to pursue careers in science, technology, engineering, and math. Most are aimed at giving students and their parents exposure to research through projects and tours at schools, museums, and observatories.

After the President’s remarks, attendees spent the evening looking through four telescopes set up around the South Lawn, visiting a portable planetarium, and stopping by a dozen space-themed exhibits on display tables set up by companies such as Boeing. A question-and-answer session with the Mythbusters ended the starry night.