Not your typical product from an electronics firm 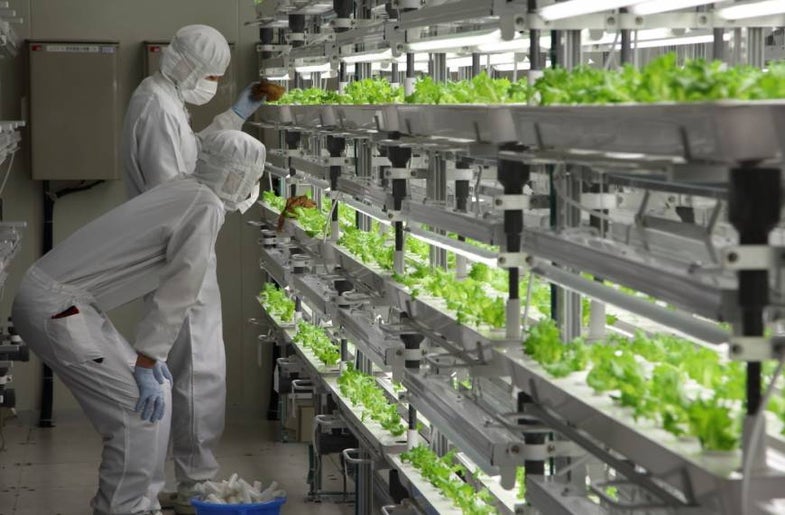 In an empty space in its former factory in Fukushima Prefecture, Japan, electronics-maker Fujitsu is now developing an unusual product: lettuce. Grown in a clean room, the lettuce has been engineered to contain low amounts of potassium. The growing operation uses a cloud computing system to optimize levels of humidity, CO2 ,and fertilizer.

Fujitsu developed the lettuce, and other vegetables to follow, in part to be eaten by people with kidney disease or on dialysis, who cannot handle vegetables with high levels of potassium. Whereas most lettuce contains about 500 mg of the mineral per 100 grams, this lettuce has five times less, according to the Japan Times. The lettuce should also taste less bitter, as it contains lower levels of nitrates.

Perhaps strangely, Fujitsu didn’t hire plant experts to grow the lettuce. Instead, the company let its semiconductor engineers do it. “Our engineers gave the same attention to the vegetable that they give to a semiconductor,” Mayumi Mogi, a spokeswoman at Fujitsu, told the Wall Street Journal. “Of course, they had to face brand-new challenges, including sterilizing the lettuce and adding fertilizer at the right moment.”

Doesn’t exactly instill confidence in the product. But the lettuce is for real, and earlier this month Fujitsu began selling it to a few stores and medical institutions. The company expects sales from its high-tech vegetables to reach ¥400 million ($3.91 million) in fiscal 2016, the Journal noted.