This Gadget Automatically Tunes Any Guitar In Seconds

The TronicalTune is your very own pocket roadie 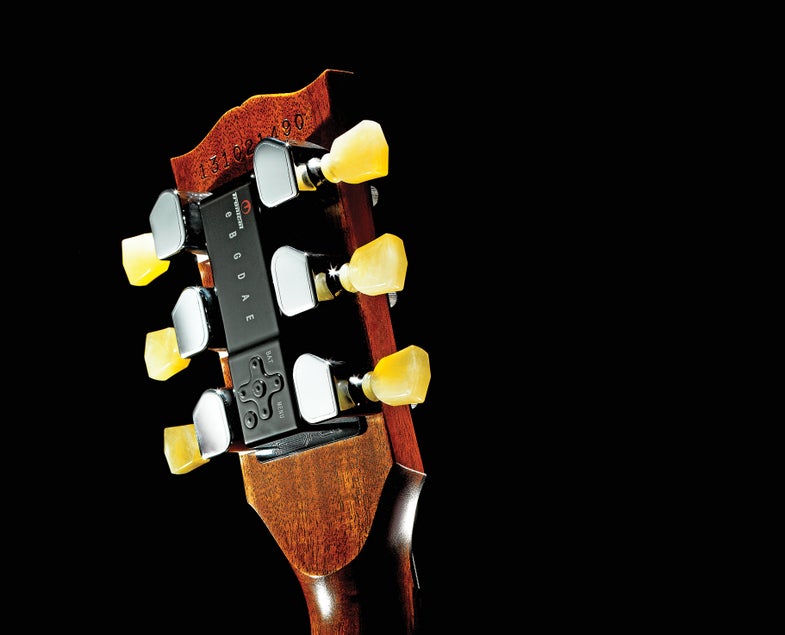 Throughout their 23-year history, automatic guitar tuners have remained stubbornly complex systems that cost thousands of dollars and require tedious professional installation. Chris Adams, CEO of Tronical in Hamburg, Germany, has figured out a way around these problems. Using an off-the-shelf microprocessor, custom tuning algorithms, and six lightweight motors, Adams developed the first system that musicians can retrofit onto nearly any guitar’s headstock—without any wiring, drilling, or soldering. Once attached, his $299 TronicalTune can make an instrument pitch-perfect in about five seconds.

The TronicalTune consists of a three-inch computer and six motorized tuning pegs, which screw onto the headstock in place of the existing pegs. On traditional tuning pegs, strings thread through holes—a technique that can cause breakage when strings rub against the edges. TronicalTune uses a gentler method: The strings coil around rods on the pegs.

After selecting from 12 presets (e.g., standard, open E), a user strums all six strings at once. A piezoelectric sensor picks up the vibrations, and a processor separates out the tones of each string. When it detects an off-pitch note, it signals the servomotor in the peg to turn, tightening or loosening the string to adjust the pitch. Once all six strings are tuned, the system turns itself off.

Different guitar bodies and strings create slight variations in timbre, so Adams programmed the TronicalTune to grow accustomed to a guitar over the course of 10 to 20 tunings. The processor tracks the overtones and adjusts its tuning accordingly.