At $199, 'The Guardian' is a small price to pay to stop kids from misusing guns 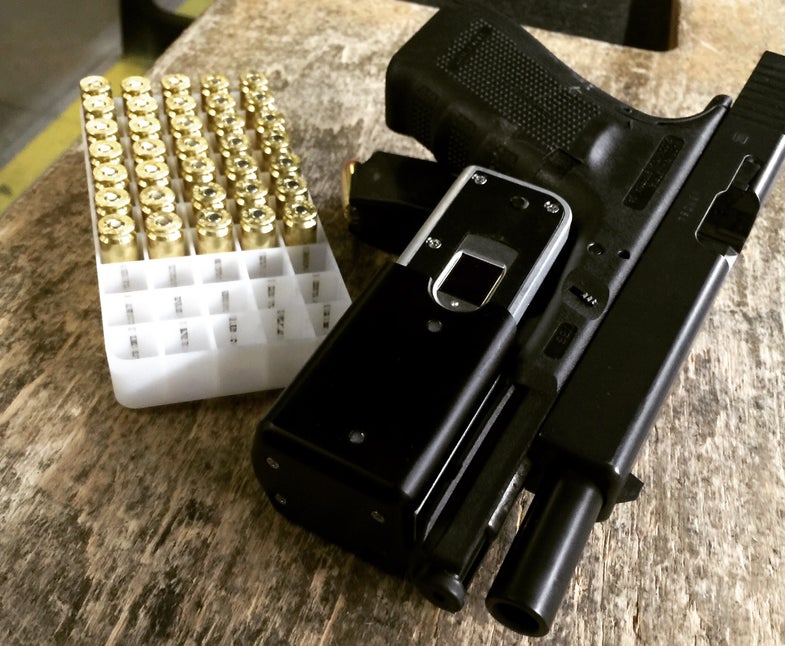 There are times when a gun shouldn’t fire. In the hands of a toddler, say, or really in the hands of anyone except its legal owner, or those entrusted by the owner. Guns are so easy to operate that even a toddler can accidentally fire one and injure or kill someone, as happened at least 43 times already in 2015. Veri-Fire’s Guardian fingerprint-reading gun safety accessory wants to change that, by keeping the gun locked for everyone but the gun’s owner. Here’s what the Guardian looks like in action:

Over the past year, Popular Science met with members of the Veri-Fire team several times to examine the safety accessory,in the last stages of its development. On November 16th, the team’s crowdfunding campaign goes live on Indiegogo.

Founded by Skylar Gerrond and Matt Barido, both U.S. Air Force veterans, Veri-Fire intends the Guardian to be a value-neutral tool for reducing harm.

It is, first and foremost, a safety accessory. The Guardian works in conjunction with safeties in the firearm itself, and doesn’t preclude a gun owner from storing their weapon in a gun safe or lock box.

The 13-ounce mechanism prototype attaches to most pistol trigger guards (though not revolvers), and once installed, locks shut when the user pulls the slide to the trigger itself. A fingerprint scanner is placed where a trigger finger naturally falls. The gun can store up to five distinct fingerprints, inputted by a second button press and 7 seconds to authorize each new fingerprint.

Once Guardian knows a fingerprint, it unlocks in less than a second, allowing the user to fire without hesitation. Once enrolled, Guardian remembers a fingerprint, so the user doesn’t have to re-enter it every time they want to unlock the weapon.

The unlocking mechanism is battery powered, and re-locking the gun is done with a simple pull on the slide. If the battery dies, it stays locked until the user manually opens up the Guardian and replaces the battery. The mechanism uses an ordinary 6-volt battery — the kind often found in digital cameras — and can last up to a year with typical use. If replaced as infrequently as twice a year, it should maintain the lock indefinitely.

While demonstrating the safety on a bright orange replica Glock in a bar, Gerrond and Barido openly admitted that the Guardian isn’t impenetrable: it can be removed by determined youth with power tools, or with a special tool shipped with the lock itself. But that’s true of all locks, and mostly true of gun safes as well. As with all security measures, the Guardian is a further obstacle to misuse, not a guarantee of perfect protection.

While all the prototypes I saw were right-handed, the Guardian can be built mirrored, so lefties like myself can use it just as easily.

Smart, but not creepy

While Veri-Fire itself was formally founded in 2013, the Guardian safety accessory is the result of six years of tinkering and development. It’s explicitly built as an attempt to reconcile the need to mitigate harm from guns while allowing gun owners to still have a weapon they can trust for self defense. As such, there is not remote updating of the locks’ software once it’s shipped. The team debated including a way for the gun to sends its coordinates by GPS, but decided against it so users wouldn’t worry about being tracked. The fingerprint data in the lock is stored locally, not transmitted anywhere.

Guardian is also, very explicitly, not a gun itself. Last month, less than 24 hours after it went live, Indiegogo took down the crowdfunding campaign for SALT, a less-lethal home defense weapon. In a statement, Indiegogo said that it took down the campaign because its “terms prohibit the offering of ‘any weapons, ammunition and related accessories” as perks”.

It’s unlikely Indiegogo will hold the same interpretation for a gun safety, especially one that is offered only as the lock itself. Gerrond tells Popular Science that “due to indiegogo’s terms of use regarding firearms and accessories, we have been in coordination with them for the last year and have gotten explicit clearance to proceed with our campaign. They have been very accommodating and understanding with regards to the purpose of Guardian.”

What it costs and who it’s for

Veri-Fire’s retail price for the Guardian is $299.00. During the crowdfunding campaign, it’ll be available for $199.00, and at pre-launch, they’re offering it at $159. That puts the Guardian at roughly half to a third the cost of a regular handgun. With about six million pistols produced annually in the United States, and with about 106 million handguns already in circulation, the market for a product like this is quite large, even if only a fraction of gun owners buy one.

It can also, in part, answer a public health risk. A 1999 study estimated that 30 percent of all handguns are stored unlocked and loaded. if the numbers are still true for 2015, that means roughly 32 million handguns could benefit from a lock like the Guardian, and if even one percent of those gun owners attach a lock to their weapon, that’s 320,000 more guns that toddlers can’t fire. It’s a gun safety approach so basic, even the NRA is tentatively on board.

Watch the Veri-Fire team unlock and fire the Guardian at a gun range below: