Everything You Need to Know About the New Facebook

If you thought yesterday’s Facebook changes were dramatic, you’d better sit down before you see what’s coming next. Today at... 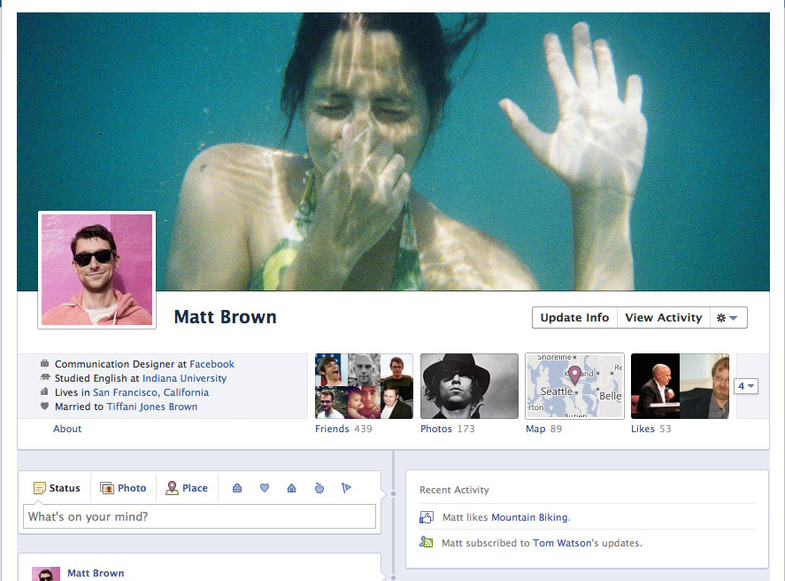 If you thought yesterday’s Facebook changes were dramatic, you’d better sit down before you see what’s coming next. Today at F8, Mark Zuckerberg led off by showing off Timeline: it’s the future of Facebook, and it’s a tectonic shift.

Zuck calls the new Timeline “all the stories, all your apps, a new way to express who you are.” The story of your life. Your entire Facebook life has been condensed into a wider one-page destination. Taking a page from the About.me site, the page-wide Cover photo is your new splash photo on your profile page. The large photo does not replace your profile pic. Zuck says it’s a way to express who you are. All content is in your Timeline view now, including apps.

As you move down your Timeline, it condenses your story the further back you go. It’s Time Machine for your life. In order to navigate to specific years, Timeline navigation on the right-hand side is available for users to choose a year. The timeline for each year shows users the most important Facebook posts of that year.

Thankfully, granular control of your timeline is available. You can feature items in your Timeline, and add or remove items. Control of who sees an item in your timeline is also available. This is an important step to assure that Facebook’s recent subscription feature doesn’t expose a users private photos with total strangers. So expect to start spending hours fine tuning your Facebook life which is exactly what Facebook wants. You spending hours and hours adjusting your online history for your friends. The Timeline beta period starts now for developers, and will roll out over the coming weeks to everyone else.

Zuck explained the difference between Ticker and Newsfeed in the upcoming update. If you are participating in a activity, but you don’t want to annoy your friends, that activities post will land in the Ticker. These will be separate from your status updates that will land in your Newsfeed. The Ticker is Facebook’s assault on Twitter. Facebook is hoping that the tiny aspects of your life that you currently share on Twitter, you’ll be more likely to share on Facebook. One site for all your social networking.

Zuck calls Open Graph a frictionless experiences. Users can add an apps activity to the Ticker without being hassled by a dialog box. Anything that you do in the app gets added to your Timeline automatically. Yes, you can adjust the app’s access to your Timeline on an app by app basis. Apps can create aggregated summaries of your activity. Users, and their friends, can see what songs they’ve listened to the most, how many times they ate pizza, or what games they’ve played. Friends can check your activity in order to discover new music, games, apps, and restaurants. You can start adding these apps now, while Timeline won’t be available to the general public for a few more weeks.

Everything You Need to Know About the New Facebook Zuck calls the new way to find content, “serendipitous discovery.” For example, when a song appears in the Ticker, users can launch Spotify, or play Spotify songs inline directly in Facebook. Friends can even listen to song together live. It’s like having the worlds longest headphone extension. They’re hoping to create a music discovery engine utilizing the music Timeline view from a user’s profile. By looking at patterns in your friends music Timeline, you can discover new music. It’s like Rdio on Facebook.

But it doesn’t stop at music, the same features are available to news junkies, social gamers, and to lifestyle apps. The Ticker displays a user’s activity from an app and in real time. Tthe ticker can be used to share information about a game in progress, who is reading what, and just how far someone ran with a lifestyle app. The apps then create a summary of these activities on their Timeline to share with others. They’re creating a discovery engine for all your apps.

This radical change to how Facebook displays your life, will cause waves of discontent among its user base. Every time Facebook adjusts even a single feature, users complain about how the company is killing a great service. But Facebook is learning from the failures of Myspace and Friendster. In order to stay relevant, they need to evolve. The Timeline is the next step in that evolution. I’m not saying it’s perfect and there’s a good chance that embarrassing items from three years ago will appear in my Timeline, but it does brings a certain element of personality to profile pages that have been lacking. I’m just hoping the app integration, especially with music, is as seamless as they say it will be.