What Are Those Bright Spots On Ceres Made Of?

The Dawn mission may finally have an answer Ceres: the other dwarf planet. Although Pluto gets most of the love these days, our first encounter with a former planet came in March when the Dawn spacecraft arrived at Ceres. The largest object in the asteroid belt, Ceres was thought to be a planet when scientists first discovered it, but it was demoted a few decades later. It’s no planet, but it might be a Death Star. 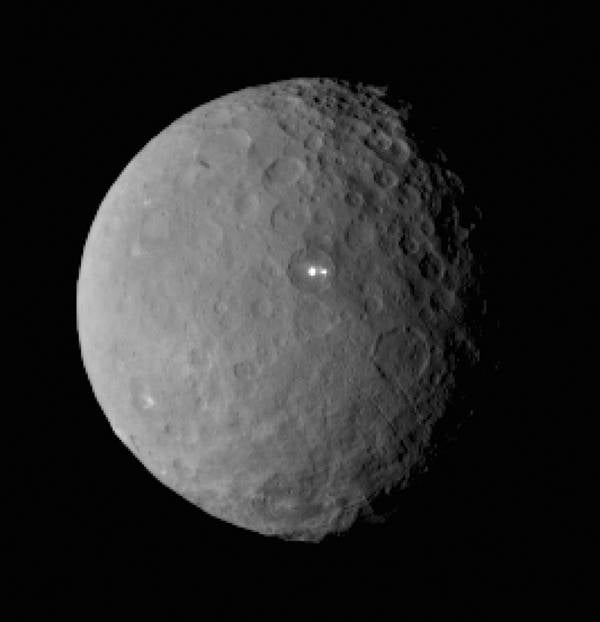 Just kidding. But seriously, most of Ceres’ surface is about as bright as fresh asphalt, so what’s up with these shiny spots? Dawn has spotted 130 of them so far, and scientists have been unsure about what they’re made of. Guesses included volcanic activity, salt, and water ice.

Now, in a paper published today in Nature, the Dawn team has narrowed the list down a bit.

Slight color variations from Dawn’s camera data indicate that the brightest spots, located in Occator crater, contain a salt called magnesium sulfate. Other substances, including water ice, might be there as well.

The Herschel space telescope detected a haze around the bright spots, indicating that some kind of frozen substance there may be turning to gas when sunlight hits it, and water ice is a good guess.

If water vapor is indeed outgassing from Occator’s bright spots, it suggests the spots are actually some of the youngest features on the dwarf planet–otherwise the water in the bright areas would have all gasified by now.

“The high reflectance of the bright material in Occator crater… is a strong indication that those deposits are young and indicate active geologic processes at Ceres,” geologist Carol Raymond from the Dawn team told Popular Science in an email. “This is a fascinating possibility and the team is eagerly mapping the geology and morphology of the surface and analyzing the spectral data to characterize these processes.”

The paper also suggests that the surface of Ceres is underlaid by a layer of salty water-ice–and that when space rocks smash into Ceres, they expose the ice and salt below. If the hypothesis is correct, it would help to explain why the entire dwarf planet is speckled in bright spots.