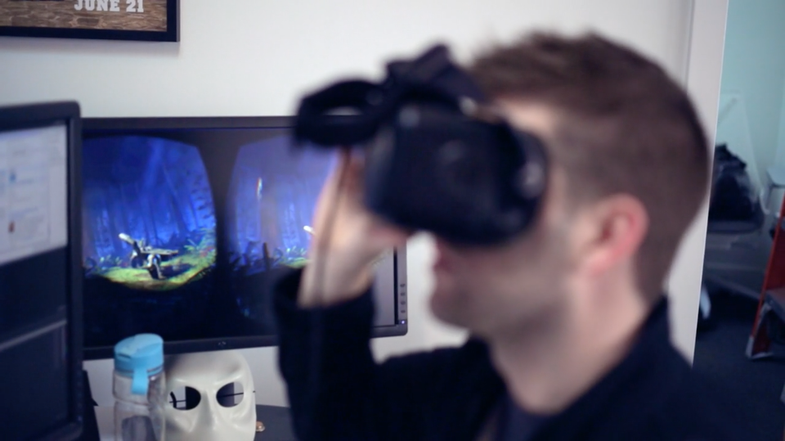 Virtual reality’s appeal has risen and faded over the decades, but 2015 seems like the year it might finally deliver–via motion pictures.

Oculus, the Facebook-owned company behind the Oculus Rift VR goggles, is in the midst of an epic push for adoption of its technology. While their device’s utility seems to pop most in video games, the company wants you to know that VR is great for immersive movie experiences, too.

To that end, the company just launched a cinema division called Oculus Story Studio. Its premiere work is a short interactive film called Lost, which is showing at the Sundance Film Festival. Designed to work on the Crescent Bay prototype Oculus showed off at this year’s CES, Lost is directed by erstwhile Pixar animator Saschka Unseld. (And, we assume, bears no relationship whatsoever to the iconic TV show of the same name.)

Speaking to The Verge, Oculus CEO Brendan Iribe said Hollywood executives prompted the creation of Story Studio; they were interested in making VR films, but didn’t know where to start. So Oculus is launching a total of five VR movies this year, also including Dear Angelica, Bullfighter, Kabloom, and Henry.

It’s little surprise that Oculus is producing films–after all, nobody knows better how to show off the capabilities of the Rift than the company that made it. (Plus, everybody and their cousin seems to be sticking their fingers into the film-producing pie.) It’s the same reason that the most compelling original apps for, say, the iPhone were made by Apple: there’s a vision of what this device is supposed to do.

As always, with technology this new and different, there’s a chicken-and-egg problem: Most people won’t take the time to develop software or media until the device is in the hands of a lot of consumers… who aren’t likely to buy the device until there’s compelling software or media.

Although gaming is still viewed as a niche category by many consumers (albeit a very large and influential slice of those under a certain age), pretty much everybody watches movies. Proving to consumers that this fancy new technology isn’t just for games could go a long way to convincing them to shell out their hard-earned cash.