We Computer-Simulated The Deflategate Football Scandal

Yes, the balls were under-inflated. But did it really make much of a difference? 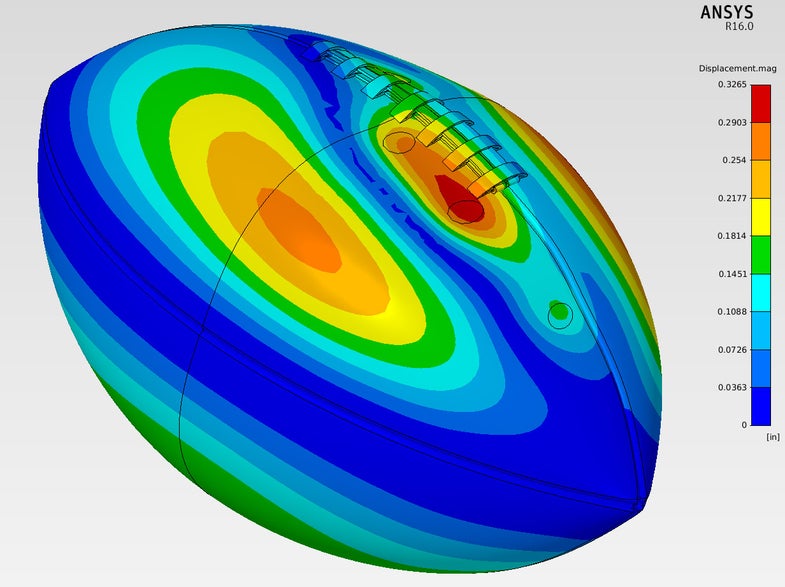 With the Patriots set to play the Seattle Seahawks this Sunday at the Super Bowl, the Deflategate controversy hangs heavy in the air. So Popular Science partnered with ANSYS, a company that specializes in computer simulations, to provide yet another perspective on the scandal.

Regulations require footballs to be inflated to a pressure of at least 12.5 pounds per square inch, whereas the Patriots’ footballs at half-time measured 10.5 psi. That matters because footballs with less air inside are easier for quarterbacks to grip and control, especially during soggy weather. The implication: The Patriots might have tampered with football pressure to give themselves an advantage. Not cool.

Don’t worry, we’re mostly steering clear of the argument over how the balls got that way. (Patriots coach Bill Belichick blamed it on the weather and the rough handling of the footballs, whereas others have pointed out that the Colts’ footballs experienced the same conditions with no major loss of pressure. Even Bill Nye weighed in on national television.) So far the NFL has made no official decision on the matter.

What we wanted to know is, how much of a difference does two pounds of pressure make, anyway? Could the deflated balls explain how the Patriots managed to wipe the floor with their opponents?

ANSYS used a multiphysics model, which incorporates things like fluid forces, thermal effects, and structural integrity. For this simulation, they plugged in data like the temperature inside and outside the football, air pressure, the behavior of the ball’s leather and rubber materials, and more. Then they used the simulation to compare the performance of a 12.5 psi football to a 10.5 psi football.

How Much Does It Affect The Grip?

When a quarterback throws a football, having a better grip means the ball will have a tighter spiral. The throw will be more precise and more reliable. So how much does a difference of 2 psi change the strength of the quarterback’s grip?

Barry Christenson, ANSYS’s director of product marketing and a Pittsburgh Steeler’s fan, simulated how much more the 10.5 psi ball deforms under a normal grip. He and the rest of the team started by looking at the typical places where the quarterback’s fingers grasp the ball: 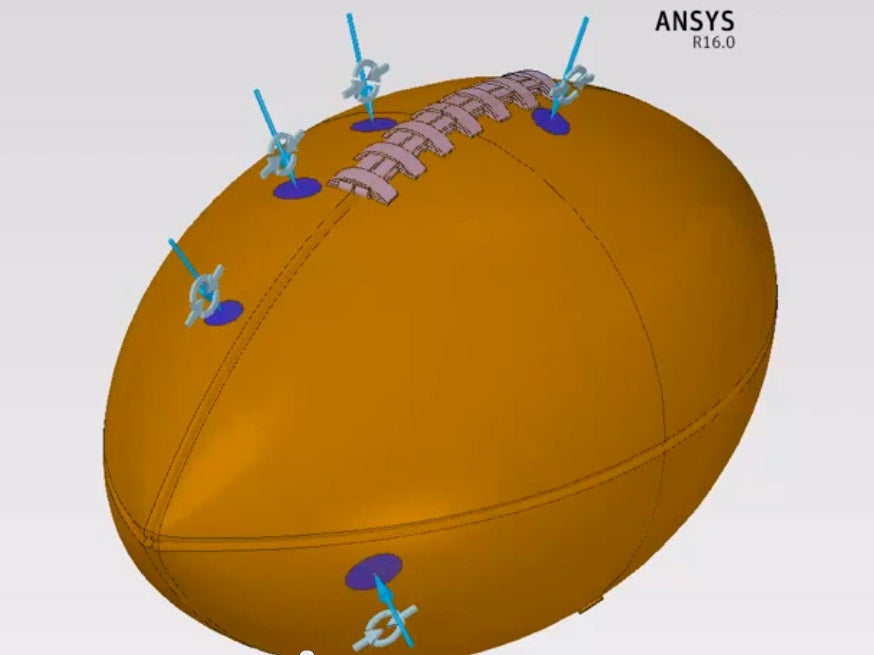 The purple dots show where a quarterback’s fingertips are placed when throwing a football.

Here’s how the grasp would deform a ball that’s inflated to a pressure of 12.5 psi (blue means no deformation and red means a deformation of 0.32 inches):

Not much of a difference, right? Here’s another view–a cross-section of the 12.5 psi ball:

Again, the two simulations look almost identical. The 10.5 psi ball caves in by an extra 0.02 inches, or about a millimeter. Christenson says that’s not enough to make a significant difference in the quarterback’s grip.

“There’s a lot of discussion going around about what kind of advantage does it give? Based on this simulation, it really doesn’t give the Patriots much of an advantage. The gripping ability of the quarterback is going to be roughly the same.”

Now, if the balls had been under-inflated by, say, three or four pounds, Christenson says the deformation would have been a lot more noticeable.

How Well Does An Under-Inflated Ball Fly?

When a football flies, the air currents flow around it and create a low-pressure environment behind the ball. This low-pressure area tries to suck the football backwards. Throwing a perfect spiral means the low-pressure area (called the separation zone) is smaller, and the ball travels farther and more accurately. By contrast, a ball that’s angled too far upwards (shown in the bottom half of the animation below) has a larger separation zone and travels more slowly.

The ANSYS simulations investigated how the 2 psi difference in air pressure might have changed how the Patriots’ footballs would have flown. They found that the 10.5 and 12.5 psi balls had the same shape, air flow, and aerodynamics. So either way, the onus is on the quarterback to make sure the ball flies right.

What About The Catch?

Is a 10.5 psi ball soft enough that it doesn’t bounce out of the receiver’s hands? In a word: No. Modeling how a receiver would catch the ball again showed a deformation of just 0.02 inches again—not enough to make a difference, according to Christenson.

In an ideal world, we’d test these assertions by having real football players throw 12.5 psi and 10.5 psi balls around, to see whether it makes a difference in performance. (If anybody has pro football players we can hang out with, please let us know.) But the simulations do suggest that the 10.5 psi balls didn’t make much of a difference in the outcome of the game. Echoing a tweet by Colts tight end Dwayne Allen, “They really could have been playing with soap and they would still win the game,” says Christenson.

Despite the support, Christenson says he’ll be rooting for the Seahawks.

Correction, January 30, 2015, 5:45 PM EST: A previous version of this story stated that the Colts accused the Patriots of deflating their footballs. The origins of the accusations remain mysterious at this time.