Why the Fighter Plane Failed

Normal aging is blamed for yesterday's F-18 crash, which killed at least three people; should these planes still be flying? 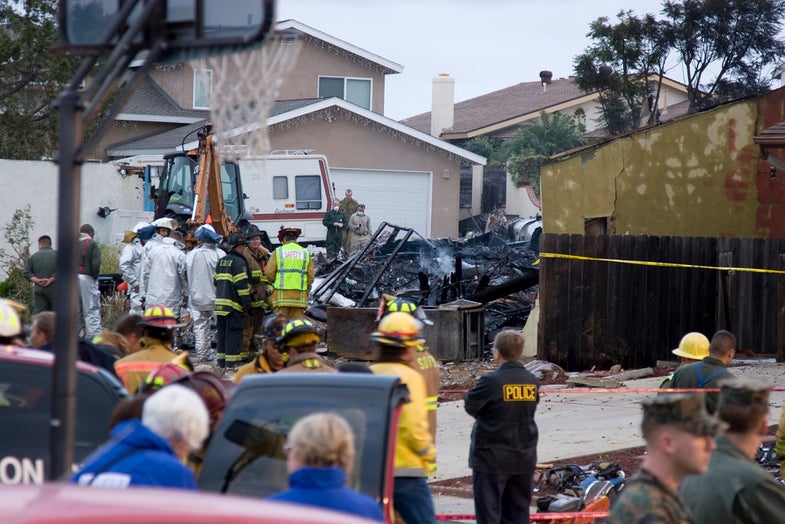 An explosion shook the San Diego neighborhood of University City yesterday afternoon when a U.S. Navy fighter jet crashed into a house. The pilot of the plane safely ejected, but a mother, child, and grandmother died when the plane hit their home, and another child is still missing. The crash occurred near Camp Kearny in Miramar, CA, home to the Navy’s Top Gun fighter pilot school.

With smoldering wreckage still being collected from the crash site, the Navy said it is too early to determine the cause of the crash. According to Marine Corps spokesperson Corporal Francis Goch, the plane, an F/A-18D Hornet, was returning from training when the pilot radioed air traffic control about a problem, ejecting shortly thereafter.

“He radioed into air traffic control, he said he didn’t know what the problem was,” said Goch. “Right now they do not have enough information to determine a reason for the crash. They could still pull a piece of the wreckage out and say ‘oh, it was this.'”

Many news reports, including the Associated Press story, focused on an aviation inspection bulletin issued by the Navy on October 23rd. The bulletin noted that some older-generation Hornets had stress fractures on the flaps on the front end of the wings. The bulletin led to 10 planes being grounded, and another 20 restricted to limited flight time, out of the 1,047 old-generation F-18s in the Navy fleet.

However, John Pike, Director of GlobalSecurity.org, believes that blaming the crash on a stress fracture of the sort highlighted in the inspection bulletin is premature and misleading. He compared it to the crash of the Concord in 2000, saying that a similar stress fracture warning had been issued about that plane, leading experts to blame the fractures for the crash, and not the metal debris that actually caused the problems.

“The plane has the routine aches and pains that come with combat aircraft,” said Pike. “Unusual problems? No, this plane has normal problems.”

Pike went on to say that given the amount of wear and tear on these planes, a couple of crashes a year would be expected. In fact, according to data provided by the Navy, including yesterday’s crash, there were only four incidents in 2008 resulting in loss of a plane, loss of life, or over a million dollars in damages, below the yearly average of six for F/A-18s. But Pike stressed that the failure rate of the F/A-18 is no greater than the crash rate of other similar fighter planes.

The F/A-18D is a two-seat plane first produced for the Navy and Marine Corps in 1987. The planes are manufactured by Boeing Integrated Defense Systems and cost around $57 million apiece. F/18s models A through D are known as “legacy” models, as the Navy began replacing many of them with new F/A-18 E and F models in 1999.

“They’re the workhorses of the fleet,” said Navy spokesman Lieutenant Clayton Doss. Doss went on to add that legacy Hornets have flown for almost 6 million hours since entering service in 1980, with only 181 crashes. But the fleet is aging, and over half of the legacy F/A-18s have flown more than the 6,000 hours projected as their total use-life.

This is the first F/A-18 crash at Camp Kearny since 2006, when a plane went down on the east side of the base. In that crash, the pilot ejected safely and the plane crashed harmlessly into the desert below.

“Losing a couple of F-18s a year is normal,” said Pike, “It’s clearly the family that’s the newsworthy component of it, unfortunately.”