How to build a home that can resist any weather 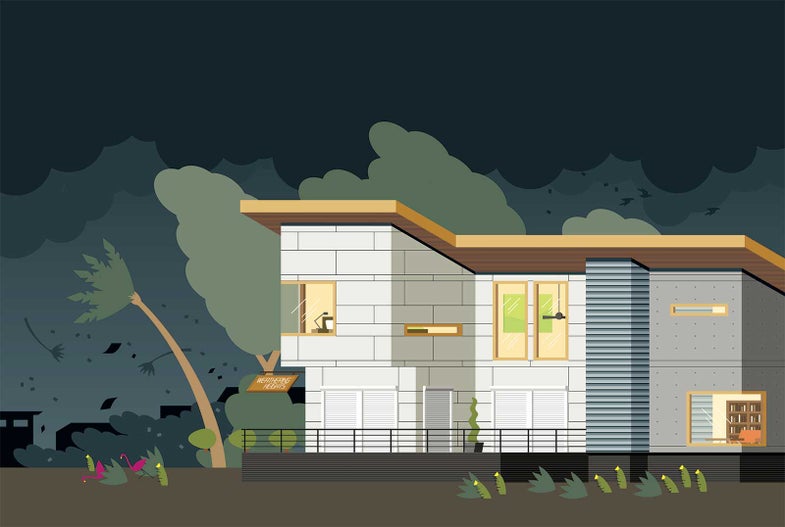 Tornadoes sweeping through the Midwest. Hurricanes and rising sea levels inundating the coasts. Wildfires burning up the Southwest, while blizzards are freezing the North. The environment can, at any time, put your home under siege. But with clever architecture and advanced materials, houses can defend themselves.

Of course, this home, with its mashup of different windows and walls, isn’t particularly realistic. It doesn’t have to be; no part of the United States has to face all of these weather disasters at once. But the technology that went into it is real. So if you’re preparing to batten down every possible hatch, consider incorporating some of these designs.

Foundations, which prevent homes from sinking into the ground, typically come in one solid piece. But a vented design lets floodwater pass underneath the living structure, leaving it unaffected. Alternately, mount the house on piles and cover the gaps with breakaway walls, which detach during a flood.

In cold regions, most homes have angled roofs with generous overhangs to let snow slide off. Why? On a flat surface, the fluff can melt, refreeze, and thaw again, putting strain on the structure and slowly leaking H2O into your home. To further reduce warm, melt-inducing spots, keep the attic cool: Ventilate it well and insulate it along the floor rather than the rafters.

Air-Gapped Exterior: Wind and rain drive water up and behind traditional siding, soaking a home’s frame. Solution: Keep an air barrier between the fiber-cement siding panels and the house. If a little rainwater gets past the siding, it will simply drain out through the bottom.

Concrete Wall: For simple fire and wind resistance, no material beats concrete. Of course, natural light is nice, and so are doors. A solid slab of concrete can’t provide that. So, in fire-prone areas, a mix of concrete and steel- siding-covered walls offers a compromise.

Ceramic: In an intense fire, cold water from a firefighter’s hose delivers a thermal shock that shatters traditional windows, feeding oxygen to the flames inside. But clear ceramic windows can withstand temperatures up to 1300°F without expanding or contracting.

Unsmashable: When struck with high-speed hurricane debris, shatter-resistant polymer layers laminated between the panes allow this glass to act like a car windshield: It might crack but won’t shatter. The material comes in varying strengths—the sturdiest can stop bullets.

Shutters: To protect windows and doors, try storm shutters, particularly retractable ones like you might see over a closed shop. When deployed— either with a motor or by hand—the aluminum slats interlock and fasten along the bottom to create an armored shell. When not in use, they roll into a 6-inch box.

Trees: Keep trees at least 20 feet away to protect your home from windborne branches.

Lawn: Your lawn is the unsung hero in the fight to halt wildfires. Plant water-retaining succulents like agave, yucca, and cactuses, and eliminate dry or dead plants near the house. Prune trees at least 6 feet up so smaller branches will be safe from a low spreading fire, and clear away dry, flammable plant materials and mulch.

It’s the 21st century; you don’t need an underground bunker for a safe room. In fact, it might even be a worse shelter—because you’re less likely to actually use it. The three safe-room manufacturers and installers we spoke to emphasized that the room must be comfortable, accessible, and generally a pleasant place in which to hole up for hours at a time. That is, of course, in addition to being able to withstand the 250-mile-per-hour winds of a category EF-4 tornado.

Walls: The ideal material for the room’s walls is a nearly indestructible insulated concrete form, or ICF. It has a concrete and rebar core, sandwiched between foam insulating layers, with drywall or another finish outside. Not only do the ICFs resist heat in fires and impacts in storms, but they also reduce the sound of those scary noises outside.

Air Supply: The room needs adequate passive ventilation, meaning air can still flow if a power outage takes down the HVAC. Beyond that, the vent system should access the roof of the building. That way, if the house collapses around the room, those sheltering inside can still get that sweet oxygen.

Interior: Make the safe room a familiar, easily accessible space—in a disaster situation, it needs to be comfortable, even for small children. A lot of people use a closet, pantry (hey, the food’s there already), or master bathroom, which provides access to running water as long as it remains safe during the emergency.

Foundation: Anchor the safe room to custom-poured concrete footings or to a home’s existing foundation. With the latter design, hooked J-bolts, which normally tie a house to its foundation, won’t be as strong as robust epoxy-anchored bolts. One 24-square-foot room, held with 19 such bolts, can withstand up to 200,000 pounds of uplift.

Door: As any cop film will remind you, the door is the weakest part of your wall. A safe room’s storm door needs several locks; some use as many as six 1-inch steel bolts to connect the door to the frame. And it should swing inward so you can still get out of the room if debris blocks the entrance.

In regions that regularly face gale-force winds, priorities like making a house fire- or snow-proof take a backseat to the more-important goal of ensuring the building won’t go flying off its foundations during the next big storm. Some architects have gotten creative with this aim, turning to an eye-catching, super-sturdy design: a simple dome.

Most buildings have lots of stuff that can come flying off in a storm—like, say, a roof. But the top won’t pop off a gigantic concrete hemisphere. Building a house from one solid piece of concrete certainly helps defend against weather: A single curved slab lacks those points of weakness that, when struck, can make a regular four-walls-and-a-roof collapse. This home’s real strength comes from its rounded shape. That’s because, when something strikes a sphere, the force gets distributed evenly over the curved surface. So a blow that might shake the seams of a standard house won’t find a similar weak point on a dome.

To build that perfectly round shape, builders inflate a giant balloon in the shape of the outside shell. They then spray that bubble with 3 inches of urethane foam insulation. When the coating cures, they add 3 inches of concrete, reinforced with rebar, on top of it, kind of like constructing a swimming pool in reverse.

How well does the dome design work? One beach-front residence, built in 2003 in Pensacola, Florida, withstood 2004’s Hurricane Ivan as it decimated the surrounding neighborhood. That house has gone on to weather two more major storms. And hemispheres aren’t just suited to squalls. In 2003, a 5,000-pound bomb reportedly hit a rounded Iraqi mosque that was built using the same company’s designs. The blast destroyed everything inside the building but left its exterior structure standing.

Most homeowners seek out familiar shapes. But as survivalists and doomsday preppers look for secure buildings, more people are moving outside the box and into the dome. These houses provide all the security of an underground shelter—with the added bonus of sunlight.