But they don't come from outer space. 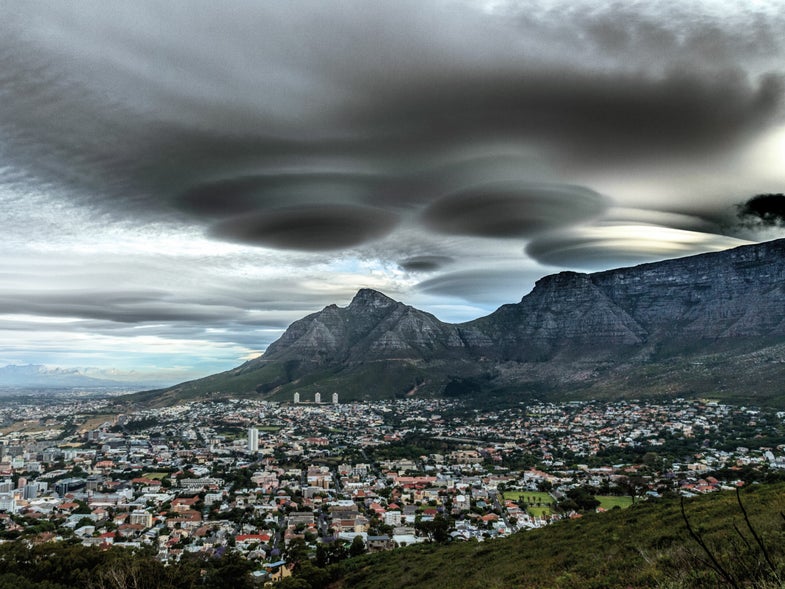 The disc-shaped formations above look a lot like UFOs. Thousands of baffled onlookers even report them as such each year. But this alien atmospheric phenomenon starts right here on Earth.

An isolated mountain is the first ingredient. The lone peak forces flowing air upward as gravity pushes it down. This triggers a continuous up-and-down atmospheric wave above the mountain. Normally, you can’t see this wave, but if the temperature in its peak drops to the dew point (when water condenses), clouds will begin to develop.

For the clouds to mold into saucers, a second ingredient is needed: a symmetrical and cone-shaped hilltop. This form means that air rises at similar heights along the mountain’s surface, ending in a lens-like configuration. With enough water vapor and airflow, more than one layer could stack up.

Because these wispy discs—called lenticular clouds— come from strong rising and sinking airflow, they indicate unsafe turbulence for planes. Thrill-seeking glider pilots, of course, chase them, attempting to catch and ride the rising air. One gutsy airman hit a record high of 50,000 feet.