What Happens At The International UFO Conference? 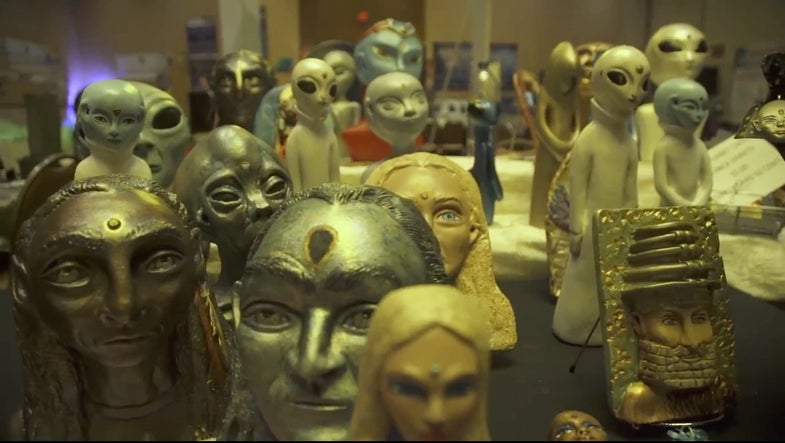 The 25th annual International UFO Congress, held last week in Scottsdale, Arizona, brings together a myriad of individuals from doctors to scientists to alien hunters to abductees to crop circle researchers. Open Minds, a media group dedicated to tracking reported UFO sightings, runs the event. It’s comprised of lectures, vendor areas, workshops and plenty of time to get mingle with other attendees and get a selfie on the epic alien step and repeat.

The prominent alien figurines speak to the fact that the community has a sense of humor at times, but on the flip side, also takes the topics at hand seriously. Individuals with long history in this field both young and old bring credibility to the table. (Although their claims can’t be verified by science, many people continue to report UFO sightings.)

Former FBI agent Ben Hansen who hosts SyFy’s “Fact or Faked,” and has worked as a producer on “UFO’s Declassified” on the History Channel, is all about gathering and analyzing the data. He works closely with Night Vision Optics, military night vision and thermal technologies that are now available for Android and iOS devices. His perspective is about brining scientific credibility to alien research.

Ben hosted a workshop on night vision tech at the event, which aimed to teach investigators how to better look for evidence in a low light night sky. He explained, “What we typically look for are objects that are a obviously a craft of some sort that are doing unconventional maneuvering… so starting and stopping, no sound.” Hansen said.

For the full interview from UFO Congress with Ben Hansen you can check out Katie’s Tech Podcast Katie dot Show.