California has been in a drought for almost five years now, making water an extraordinarily precious resource–one that Californian residents and governments are eager to protect.

On Wednesday, California suspended its mandatory drought restrictions, saying that the state is turning over responsibility of the water restrictions to individual communities, letting them set their own restrictions based on their water budgets, with the state only stepping in if the budgets are unrealistically optimistic.

But how can a community keep track of its water budget? IBM’s Watson program has already beaten Jeopardy!, invented its own recipes, assisted in treating patients with chronic conditions, and is currently used by over 80,000 developers. Now, in partnership with environmental analytics company OmniEarth, Watson will help save the existence of humans on Earth–or at least in California.

“Water is one of the most fundamental things for life on Earth,” OmniEarth co-founder Jonathan Fentzke told Popular Science. “It is a valued and now increasingly managed resource, especially in the United States, given climate change and the severe drought conditions in California.”

OmniEarth’s program uses satellite and aerial imagery to keep track of water use. Given a picture, Watson can ‘see’ what’s in the picture, whether it’s an animal, car, toy, etc. (You can test out the visual recognition element in this demo.) The system isn’t perfect. In looking at a satellite image of a cemetery, Watson identified the gravestones as buildings or high-rises. But that doesn’t mean the system is broken, just that, just like a human, Watson needs training.

“What’s special about our service is you can basically give it images, and tell it what you’re looking for in those images,” said Jerome Pesenti, vice president of IBM’s Watson platform.

In this case, OmniEarth has told Watson to look at an aerial or satellite image of an area of land and recognize trees, shrubs, grasses, pools, solar panels, houses and impermeable surfaces (like parking lots). The company already has public records that show property boundaries. By incorporating all the data, Watson can sort through an estimated 150,000 images in 12 minutes, showing which landowners have pools, which have solar panels, how many trees or shrubs they have in their yard, and even how green their grass is. 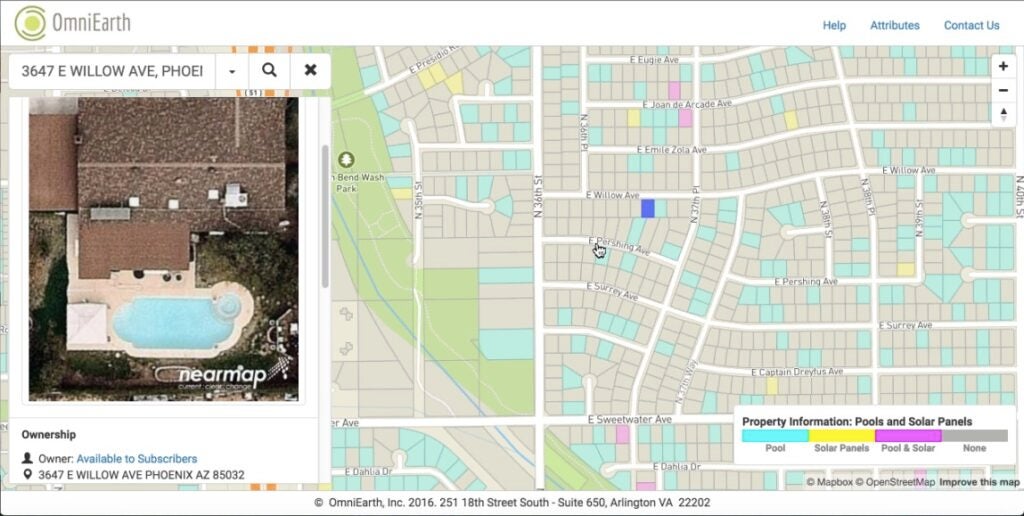 An example of what Watson ‘sees’ based on satellite imagery. In this case, Watson can ‘see’ that the house in question has a pool, and is therefore using a large amount of water.

The greenness of an area is important. Using the visual aspect of the Watson program they can see how healthy or green an area is. By incorporating how much water is available (weather information like temperature and rainfall helps), and knowing how much water it takes to keep a lawn or tree green and healthy, the software can see where water is being wasted, either due to bad practices (overwatering is very common) or accidentally (leaks, etc).

“We’re primarily focused on how much water water districts are using as opposed to what they could be using,” Fentzke said.

Using that information, water authorities or companies can target areas or homes where people are wasting water, and send specialized educational materials to let people know how they can cut down on water waste. Some of OmniEarth’s customers have already started seeing results, with some reporting a 15 percent reduction in water use, just by using the conservation messages. Many people, Fentzke said, may not even realize that they’re wasting water. There could be bad meters, leaks, or bad settings on automatic sprinkling systems that are contributing to the problem.

“We’ve found it to be very effective in targeting people who may not even know that they’re inefficient,” Fentzke said. In one case, he mentioned a manager of a water district that was an OmniEarth customer. Results from OmniEarth were turned over to the district, and the manager’s house was flagged as inefficient. Embarrassing.

“He thought it was impossible, so of course he called the utility to check it. It turns out, he had a leak in his pipes,” said Fentzke.

OmniEarth’s water resource products, launched last year, are already being used by over 90 agencies in California, including the City of Folsom and the East Bay Municipal Water District, and the company has now expanded the water efficiency program nationwide.