There's an ape for that 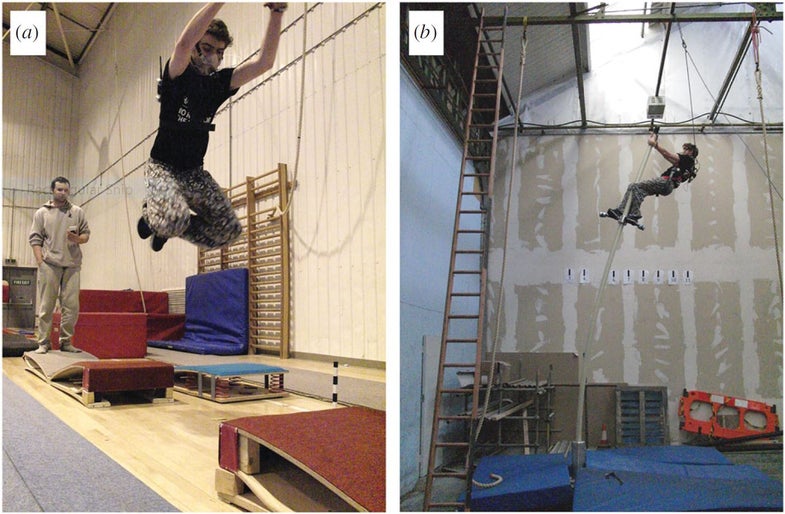 If you’re a large, tree-dwelling ape like an orangutan, what’s the best way to get across a gap in the branches? Should you jump or swing across, or maybe climb down and cross the gap on the ground? Scientists suspect the ape’s decision will depend on which method uses the least energy, but that has been difficult to study because orangutans are endangered and elusive. So a group of researchers in the U.K. turned to a different kind of ape: humans.

In an experiment published today in Biology Letters, the researchers used parkour athletes as a stand in for orangutans. Similar to arboreal apes, the paper notes, parkour athletes “specialize in developing new techniques for moving through complex, three-dimensional urban environments while avoiding the ground.”

To estimate how much energy an ape would use by either jumping, swinging, or climbing down to cross a gap, the researchers got creative. They asked 28 parkour athletes to sway on and jump from “tree branches” (which were actually custom-made fiber glass poles of varying stiffness), and to climb vines and trees (simulated by ropes and ladders). All the while, the athletes wore face masks that measured how much oxygen they were consuming, which indicates how much energy they were expending for each activity. Another advantage of using human test subjects: Orangutans are “not very keen” on wearing those face masks, jokes Susannah Thorpe, one of the study authors.

It turned out that each of these activities was much more energy-intensive than previously thought (although the researchers acknowledge that orangutans, who are adapted to live in the trees, likely move a bit more efficiently in these situations).

Thanks to gravity, the parkour athletes used about 5 to 10 times more energy climbing up and down the ladders and ropes, compared to swaying or jumping across branches. Because of this, the researchers think arboreal apes will tend to avoid climbing up or down more than a few meters to cross a gap.

In nature, the choice of whether to jump, swing, or climb will also depend on how big the gap is, how stiff the branches are, and how large the animal is. While larger apes may save more energy by jumping or swaying instead of climbing, they also have a higher risk of falling or getting injured while jumping, compared to smaller animals.

All in all, the paper helps to explain why some populations of orangutans seem to spend more time on the ground than scientists previously assumed, and may perhaps shed light on why our own ancestors climbed down from the trees to make a living on land.