What’s The World To Do About Water?

The world's water problem, and how to solve it 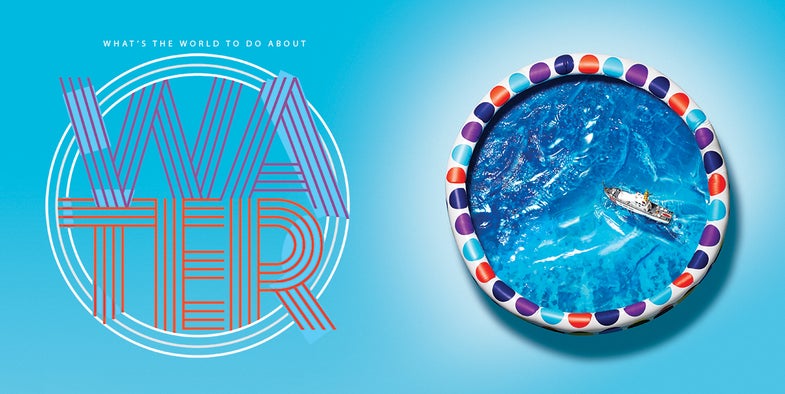 In 2007, when my daughter was seven years old, we would brush our teeth together every night as part of our daily ritual. To conserve water, we would turn off the faucet after wetting our brushes and turn it back on only to rinse. One night, I didn’t turn off the water fast enough to her liking. She turned off the faucet, made an angry face at me, and growled, “Turn off the water, Daddy. The scientists need time.”

That statement still resonates with me today, not only because of her precociousness but also because she was exactly right. Kids seem to intuitively get this: We need to conserve our resources to buy ourselves time so scientists can find new solutions to our problems. And this is especially true for water.

Water is on track to be the most important and most contentious resource of the 21st century. It could replace oil as the strategic resource that triggers geopolitical conflict. But with the right solutions, it could also be the one that brings us all together.

In many ways, the 1900s was the century of energy conflict, with great skirmishes triggered and fueled by a quest for petroleum. Now, the dawn of a new energy era is just around the corner—with the prices of solar power plummeting, and distributed generation and energy efficiency on the cusp of taking off—and we can project forward to a time this century when water replaces energy as the next great challenge for humanity. Getting water right could clear the path to a fully liberated, healthy, and peaceful civilization.

But water is complicated. First, there’s no alternative. There are alternatives to coal and petroleum, but water cannot be replaced. Second, water is intertwined with every other sector of society. Energy production requires water for cooling power plants and fracturing shale. Agriculture needs water for irrigation. Industry and cities use trillions of gallons of water for all sorts of purposes. Third, water demands are growing at the same time supplies are fluctuating. Climate change is expected to intensify droughts and floods while shifting where water will be and when. That means humanity will be confronted with decisions about whether to move people to water or water to people.

Thankfully, there are solutions. Some are large, incredibly expensive, and energy-intensive, such as building cross-continent water-transfer aqueducts, new hydroelectric dams, and massive desalination plants. Some are small, such as using micro water harvesters that condense water vapor out of the air. All of them take a while.

In April 1961, President John F. Kennedy said, “If we could ever competitively—at a cheap rate—get freshwater from saltwater, it would be in the long-range interest of humanity and would really dwarf any other scientific accomplishments.” That was one month before his famous moon-shot speech. Before the decade was over, we sent man to the moon and back. But we still haven’t cracked the code on how to get freshwater from saltwater without a lot of money and energy. That’s mainly because our great innovation apparatus has not been dedicated to water. Research budgets have prioritized energy, defense, and health while mostly ignoring water, even though fixing water would help our energy, defense, and health problems. If we spent as much money looking for water on Earth as we do searching for it on Mars, the outcomes might be very different.

In the end, we can solve the water problem. But we need aggressive conservation that will buy us time while our inventors get to work.