Today, one in three American mothers gets major surgery during delivery, despite evidence that this rate of intervention is excessive. 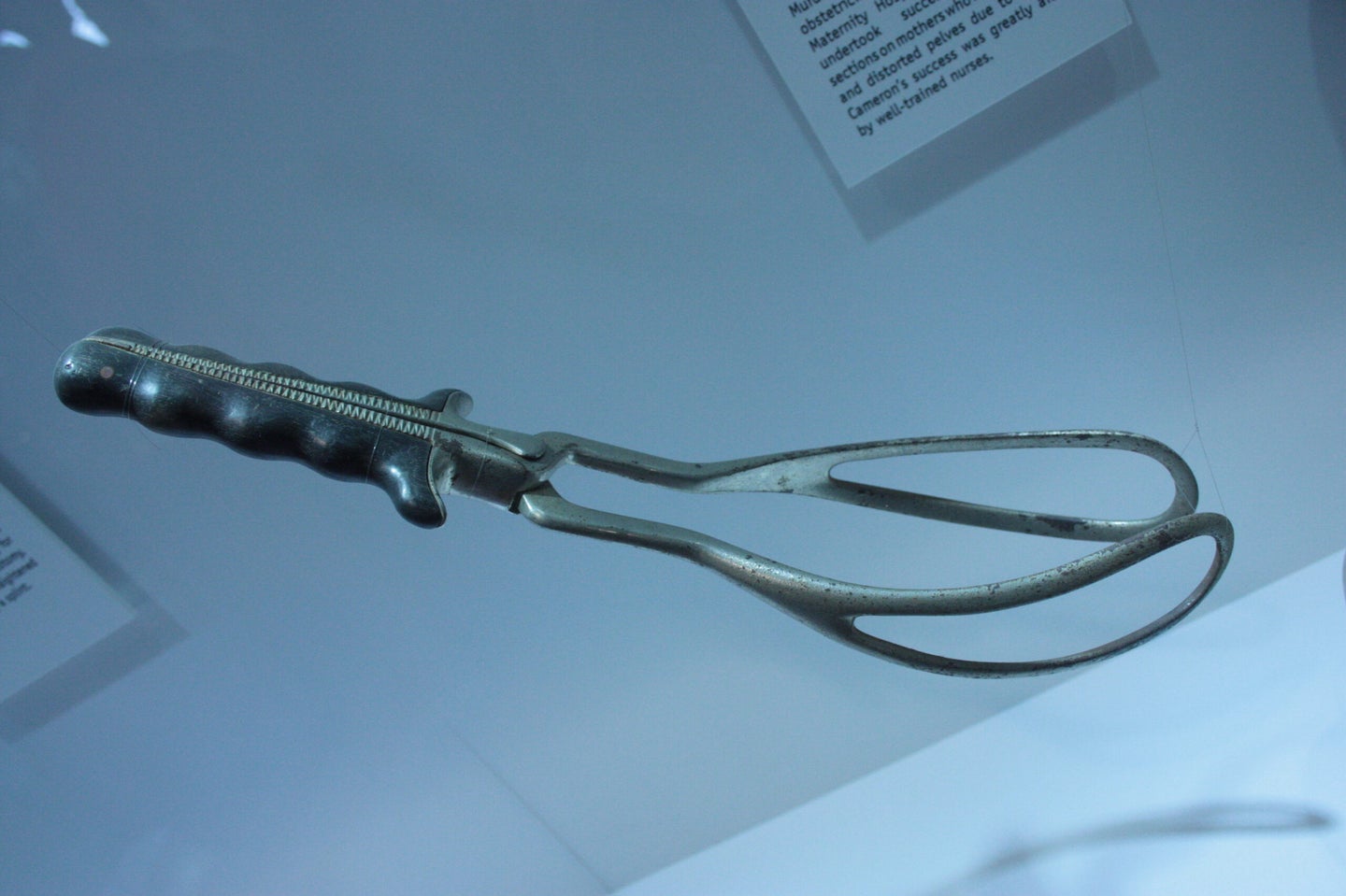 Obstetric forceps look like ninja weapons. They come as a pair: 16 inches of solid steel for each hand with curved “blades” that taper into a set of molded grips. Designed for emergencies that require a quick delivery, they have a heftiness that conveys the weight of wielding them.

The first time I saw forceps used was also when I learned how to use them. An experienced senior obstetrician and I did the emergency delivery in tandem. She showed me how to orient myself to the bony parts of the mother’s pelvis and guide each blade into the birth canal with my fingers while ensuring the curvature safely cradled the baby’s head. She clinked the shanks together so that both parts of the forceps locked definitively in place. As the frightened mother pushed, we pulled together so I could get a feel for the proper angles and necessary force.

We pulled so hard that I cringed. I saw the mother’s partner cringe as well. I could hear the depressed heart rate of the baby on the monitor. I could hear my own pulse pounding in my ears. But it worked. A baby girl was born and took her first breath of oxygen-rich air. Aside from matching bruises where the forceps pressed the baby’s cheeks, both she and her mother emerged from the delivery healthy. I was in awe of that power, the ability to step into a delivery room, avert a potential tragedy and preserve a moment of joy.

Once ubiquitous, the skill to use forceps is now rare. As cesarean deliveries and easier-to-perform “vacuum” deliveries became more common, the inclination of obstetricians to use forceps waned. Still, their introduction into birthing rooms permanently changed the way humans are born.

The role of lived experience

For most of human existence the risks of procreation were severe and terrifying. Everybody knew someone who died from a complicated pregnancy. Everybody knew someone whose baby was born dead. Not only did women face the prospect of birth and death simultaneously, in the absence of contraception, they did so again and again. Until the early 20th century, the probability of dying from childbirth was similar to the probability of a woman dying of breast cancer or a heart attack today.

Women managed their understandable fear by drawing on the support of their community. They gave birth at home under the care of other women—family members, friends and neighbors who were also mothers. Families may have called upon a midwife, though back then there were no specific qualifications that distinguished the midwife’s professional skills beyond having attended a lot of births. For most of human existence, the most important form of expertise in childbirth was lived experience.

The capability to intervene in childbirth began to shift the balance of preferred expertise toward those who could wield surgical instruments. At first, the available options were limited and gruesome. Intervention only occurred under dire straits. If the baby appeared stuck in the birth canal, a physician could make more room by fracturing the mother’s pubic bone or by performing a vivisection—a cesarean without anesthesia, good lighting or the ability to stop bleeding. Or he could remove an obstructed fetus by whatever means necessary, potentially saving the life of the mother, but almost guaranteeing the mutilation and death of the baby.

Forceps were a game changer that made saving both possible. Sure, they resembled weaponry. But under the circumstances, the promise of delivering the baby alive and intact was widely welcomed.

The costs of technology and the need for balance

Yet, this capability also came at a cost.

In the 19th century, as more women accepted medical intervention in childbirth, the composition of the birthing room began to change. The professionals who originally wielded forceps – both midwives and physicians—were men. They lacked lived experience in giving birth themselves. Gender roles and modesty standards also prevented practical opportunities to learn: men were discouraged from performing direct visual examinations of the female pelvis.

Most importantly, everyone—laboring mothers, their female caregivers and the male midwives themselves—recognized that what the male midwives had to offer was intervention with forceps. This led to a skewed perspective on when intervention was truly necessary. Rather than being performed during emergencies only, the ever-present specter of death made it compelling and common to use forceps preemptively. And as these professional male attendants grew in popularity in the later half of the 19th century, the role of family and community in providing support became increasingly marginalized. By the mid-20th century, intervention in childbirth was routine and nearly all women had their babies in hospitals under the care of male obstetricians.

Many of our modern norms resulted from the way these shifts propagated into the present. Today forceps deliveries are rare but intervention in childbirth is not. Today, one in three American mothers gets major surgery to give birth, despite evidence that this rate of intervention is excessive—and not only unhelpful but harmful. Today, the type of continuous labor support once provided by a mother’s community has largely fallen away, despite evidence that it improves both birth experiences and outcomes.

The irony is that in our sharp focus on using technology to prevent harm, we appear to have lost sight of lived experience as its own complementary form of expertise. Valuing lived experience—what a mother is feeling, and what other mothers with similar experiences have felt—might not only make childbirth safer but also more dignified. It might provide better insight into when intervention in childbirth is truly helpful (and when it is not). It might help us support each other better when we are trying to start or grow our families. And it might help us adjust our collective goals to expect more from childbirth than simply emerging from the process unscathed.

Neel Shah is an assistant professor of obstetrics, gynecology, and reproductive biology at Harvard Medical School.