How Airbags Work, And How They Can Fail

Millions of the safety devices have turned deadly

The new year was barely 72 hours old when Honda announced that yet another person had been killed by a defective airbag, bringing the grim U.S. total to nine. The tally for those seriously injured stands at more than 100.

It’s been a brutal year for motorists and for an industry safeguard that was, until now, seen as an unmitigated lifesaver. Last spring, several automakers began recalling vehicles because their airbag supplier, Takata Corp., had shipped bags with botched inflators. It turns out the inflators can send shrapnel spewing through a cabin with such force that they leave victims with what police have said look like gunshot and stab wounds. (In one case, cops actually started a homicide investigation.) Global giants like Honda, Toyota, Nissan, Ford, Mazda, BMW, Subaru, and Pontiac were forced to recall 19 million vehicles in the U.S., the most massive recall in auto history.

What exactly has gone wrong? And what is the science behind airbag deployment and effectiveness? It’s surprisingly simple, and although the National Highway Traffic Safety Administration estimates that airbags have saved some 37,000 lives between their initial adoption in 1975 and 2012, it took years for automakers and regulators to believe in their effectiveness.

How do airbags work?

In 1969, Popular Science raved about a new-fangled invention called “air pillows,” which promised to revolutionize car safety. But these pillows became hotly contested in the two decades that followed. Not because of the science behind them, but because of human psychology: Officials worried that the passive protection offered by these airbags would discourage people from buckling their seatbelts. As late as 1984, PopSci reported that airbags were still a rarity on the road: “Most auto makers strongly oppose installing air bags; only Mercedes currently offers one.” Today they are ubiquitous, showing up in 190 million vehicles in the U.S..

The idea behind the airbag is to take advantage of the physics of a crash. In the case of a head-on collision, a car usually stops fast. The body of the driver, of course, doesn’t. It follows Newton’s second law: its momentum continues until an outside force (usually the steering wheel, dash board or windshield) brings it to a stop. An airbag doesn’t just soften the blow. It actually lowers the impact by stretching it out over a longer period of time. It also spreads the impact over a larger area of the body. That way, no single area (forehead, chin, neck) bears the brunt of it. That’s why airbags inflate and then quickly deflate—to gradually bring the driver’s momentum from 60 mph to zero.

The chemistry and mechanics of airbags

There are six main parts of an airbag system: an accelerometer; a circuit; a heating element; an explosive charge; and the bag itself.

The accelerometer keeps track of how quickly the speed of your vehicle is changing. When your car hits another car—or wall or telephone pole or deer—the accelerometer triggers the circuit. The circuit then sends an electrical current through the heating element, which is kind of like the ones in your toaster, except it heats up a whole lot quicker.

This ignites the charge, often solid pellets of sodium azide (NaN3), which explodes. The explosion produces nitrogen gas (N2~) that fills the deflated nylon airbag (packed in your steering column, dashboard or car door) at about 200 miles per hour. The whole reaction takes a mere 1/25 of a second.

Parts of an airbag

The mechanics are pretty simple.

The bag itself has tiny holes that begin releasing the gas as soon as it’s filled. The goal is for the bag to be deflating by time your head hits it. That way it absorbs the impact, rather than your head bouncing back off the fully inflated airbag and causing you the sort of whiplash that could break your neck.

Sometimes a puff of white powder comes out of the bag. That’s cornstarch or talcum powder to keep the bag supple while it’s in storage. (Just like a rubberband that dries out and cracks with age, airbags can do the same thing.) Most airbags today have silicone coatings, which makes this unnecessary.

How do airbags kill?

In the case of Takata’s airbags, the inflator—the metal cartridge packed with propellant wafers—has ignited with too much force. When the housing ruptures, it sends metal shards flying through the bag in the same direction as it is inflating—namely straight up at a driver’s or passenger’s head and neck. In one accident, a 35-year-old Texas man, whose 2002 Honda Accord struck another car head on (at the relatively slow speed of 30 miles per hour), bled to death when shrapnel severed his carotid artery and jugular vein and fractured his windpipe, according to an autopsy. Police said a victim in Orlando looked like she had been shot in the face. 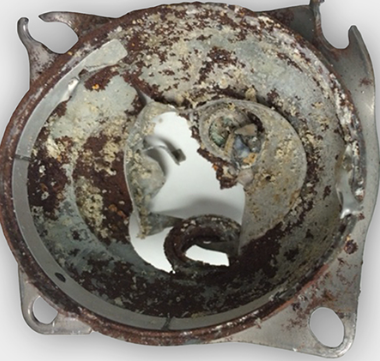 A piece of airbag canister that exploded, striking and killing a woman in Orlando

Automakers and federal regulators have found multiple causes for the inflators turning deadly. Among them: bad oversight on the manufacturing floor; the design of the car itself; and years of exposure to high heat and humidity in certain regions (a number of the deaths have occurred in Texas and Florida). Such heat and humidity can break down the propellant wafers, so that the ammonium nitrate propellant—a chemical than can be used in making bombs—burns too hot and too quickly, creating excess pressure in the metal housing that then explodes with deadly force.

What can you do to avoid the shrapnel? Check this list to make sure your car isn’t among the 19 million recalled for faulty airbag inflators.