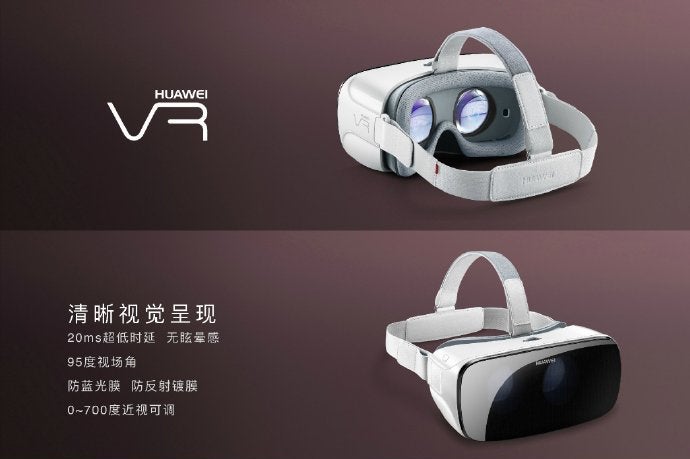 Smartphone-maker Huawei is breaking into the virtual reality game with its new Huawei VR headset. Announced today in Shanghai, the Huawei virtual reality helmet, unlike PC and gaming, console-tethered virtual reality headsets, will function like the Samsung Gear VR. Simply insert your Huawei P9, P9 Plus, or Mate 8 handset into the device and put it on your face.

Huawei made no mention of price or when its phone owners could expect the VR headset to be available, other than that it will be some time this year. Android Authority thinks it will likely be “this season.”

Huawei has never been shy about directly competing with other hardware makers. Back in September, its Mate S announcement showed audience members a phone that could use its brand of Force Touch-like pressure sensitivity to weigh items. Apple rebranded Force Touch to 3D Touch when it was released on the iPhone 6S and incorporated OS-level quick actions–like pushing forcefully to summon the application switcher or preview iMessage windows.

Huawei’s virtual reality solution is the first to make use of the USB-C. Like Samsung’s Gear VR, plugging your phone into the device gives the headset all it needs to track the motion of your head and serve up a fictional reality. WIth Huawei’s line of flagship phones only offering 1080 pixel displays, the P9 and Mate 8 devices won’t offer up the same visual clarity as what you’ll see on a device like the Gear VR. Samsung’s phones offer 2K level of pixel density–1440 by 2560 pixels–on their phone screens.

The helmet could point to a larger trend: the release of cheaper, but still immersive, virtual reality experiences alongside smartphone releases.

But along with screen resolution, the Gear VR has another ace up its sleeve: Oculus. The Gear VR is still a Samsung focused product, but is bolstered with extra support from Facebook (who owns Oculus) and even supports some software also playable on the Oculus’s main VR product, the Rift, like Eve: Gunjack for example. Huawei may have a tough time competing with many VR developers focusing on making their games Oculus-compatible. Especially for a device that’s already in the hands (or on the faces, rather) of many.

Gaming connoisseurs may still want to turn their attention to the more high-end headsets like the Oculus Rift and HTC Vive. But while Huawei VR may offer less horsepower, the helmet could point to a larger trend: the release of cheaper, but still immersive, virtual reality experiences alongside smartphone releases. Much of the hardware needed to offer a good VR experience is already part of the modern smartphone. Offering a visor that allows you to comfortably strap your device to your face for immersive experiences is a small extra step that could lead to added phone sales–depending on available software. Let’s hope other phone-makers like LG, HTC, and even Apple join the trend.