We're all familiar with images of lurching robots performing rote tasks on the factory production lines. But the capabilities of robots have evolved well beyond the banality of those grainy industrial films. 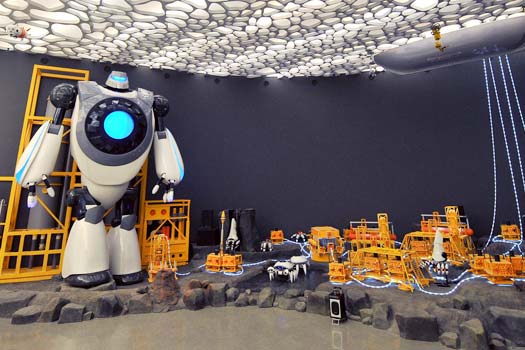 Today’s industrial robots have incredible dexterity to match their brute strength, and can actually learn on the job. And then there’s an entirely new breed of robots—some in humanoid form, and others that take highly practical forms all their own—that can walk, talk, save lives, and perform critical jobs in extreme environments, or simply take care of mundane tasks at home while we’re out enjoying our lives.

From healthcare and homecare, to military use and emergency response, robots are fast becoming a fixture in our lives. A number of T. Rowe Price’s analysts are closely following their every move, and one of them spoke recently about the latest innovations and opportunities in robotics, as well as where we might see them making an impact next.

For years now, robots have worked tirelessly in the shadows to increase or enhance the productivity of humans. Until recently, however, the futuristic, sci-fi-inspired vision of robotic technology has largely remained disconnected from the glamourless utilitarian role it’s played in manufacturing. But robotic technology has now advanced to the point where we’re truly starting to see it move into many new areas of the economy.

THE TWO PHASES OF ROBOTICS

The evolution of robotics can be divided roughly into two phases. In the first phase, we saw electric machines that were programmed to perform specific tasks but otherwise didn’t really interact with the real world, such as those we’ve seen in automotive manufacturing for years. Japanese companies were early to market with the industrial robots used in many areas today, including auto manufacturing, distribution centers, foundries, pharmaceutical packaging, and many others.

There’s a publicly traded Japanese company called FANUC that actually has a fairly robust portfolio of industrial automation robots. Their blade profiling systems, for instance, are used to finely sharpen and finish critical metal parts for gas turbines used by aerospace and energy manufacturers. Some of their other systems are used on a production line to hold, move, and precisely place extremely heavy objects with the same delicate care and relative ease that a person might use to put a carton of eggs into the refrigerator.

Industrial robots have progressively become more and more sophisticated. But the potential for much broader industrial and consumer acceptance is tied to the development and advances occurring in the second phase of the robotics evolution, which we’re in the early days of right now. These robots aren’t simply programmed to perform repetitive tasks—they can absorb data, recognize objects, and respond to information and objects in their environment with greater accuracy.

The Japanese were leaders and early adopters when it came to industrial robotics, but now we’re seeing more activity and innovation coming from companies in the U.S. and Europe as well. And we expect robotics to eventually touch every industry and evolve into a truly global opportunity with a worldwide landscape of players over time.

One great thing about robotics is that when you are aware of it, you know that it’s improving your life. Cultural acceptance is really key here, and our ability to touch and interact with the robots is important. There are a number of areas in the global economy where people might actually be surprised to learn about the participation of robots.

For example, people have talked about the concept of self-driving cars for decades. If you happen to drive anywhere near San Francisco, you’ll probably end up driving next to one made by Google; I have, several times. When you see one, you know what you’re looking at, but I don’t think that anyone expected to be commuting alongside self-driving cars in a public corridor so soon— and yet we are. And of course there is iRobot’s Roomba home robot vacuum cleaner, which has now sold more than 7 million units in over 50 countries worldwide. There is even a neat start-up company called Romotive that has developed a small, mobile robotic platform that uses your iPhone as its “brain.”

There are many ways that robots are increasingly being used to modernize healthcare and related services. Intuitive Surgical’s da Vinci surgical robots are used by doctors in the U.S. as the standard of care to perform minimally invasive prostatectomies. They’re also used here, and to a lesser extent around the world, to perform hysterectomies, lung surgery, and certain cardiac, ear, nose, and throat procedures, too.

Another great example comes from iRobot, a company whose RP-VITA clinical remote presence robot utilizes a mounted iPad to allow offsite specialists to interact with patients and administer care. This platform enables doctors and practitioners to administer more personalized services than would be available through the web or stand-alone kiosks. Eventually these robots might make their way into patients’ own homes, or other locations like elderly care facilities, just as robotic home vacuum cleaners and floor washing units are today.

MILITARY AND PUBLIC SAFETY ARE BURGEONING MARKETS
One sector that has significantly increased its adoption of robotics is the military, where they’ve essentially gone from zero ground robots in 2002 to over 5,000 ground robots today. The expectation is that over time robots will be used more and more for reconnaissance, battlefield support, and sentry duty. This is in addition to the tasks commonly associated with them now, such as the detection and disposal of explosive devices, or radar tracking and missile defense. These robots will be fully autonomous, enable remote awareness, and be capable of going places, determining what’s happening in their environment, and transmitting information about it as needed. There’s every expectation that they will operate close to military personnel in the field and act as a force multiplier.

Similarly, we expect to see robots make an impact in the public safety area. The adoption of modern information technology within the first responder community has been lagging behind other segments, but with the FirstNet initiative (a single, nationwide interoperable public safety broadband network being built and operated to help police, firefighters, emergency medical service professionals and other public safety officials perform their jobs and stay safe) becoming viable, there are a number of robotics companies—established firms and startups—ready to provide robotic products that can help make a difference.

For instance, there are several companies pursuing the concept of quadrocopters to be used in emergency response situations for military and commercial applications. These are unmanned, remote-controlled flying drones that can serve as reconnaissance tools to provide real-time assessments and monitor dangerous situations. Another similar idea is iRobot’s throwable surveillance robot concept. Imagine a five-pound robot with cameras and sensors that emergency personnel can literally toss into a burning building or a hostage situation and, through the use of a tablet, immediately have on-the-ground situational awareness and two-way communications capabilities with people on site, without putting lives at risk.

INNOVATION MUST BE BALANCED AGAINST SCALE AND PROFITABILITY

The development of robots is a multi-disciplinary exercise, which is why you tend to see a lot of the real cutting-edge innovation come out of academia—academic researchers aren’t held captive by the need to generate profitable growth, and they aren’t subject to conference calls around quarterly earnings. One such academic program that comes to mind is the University of Pennsylvania’s General Robotics, Automation, Sensing and Perception (GRASP) Lab, where they are doing some really interesting work on autonomous quadrocopters that utilize a control system and sensors to fly indoors as well as outdoors.

People in academia can come up with incredibly innovative robots that look really neat, but the challenge is to take an innovative idea and turn it into a physical product that can be manufactured for profit. It is very difficult, however, to bring an innovative concept to market, protect the intellectual property, create a distribution model, build a brand, identify customers, and find the right price point based on the market.

As a firm, we own iRobot and have followed the company for quite some time. They’re a “rule breaker” in the robotics space, having scaled into a half-billion dollar revenue business—a good amount of that is driven by sales of home robots, like their vacuum-cleaning Roomba and floor-cleaning Scooba robots, and is complimented by sales of unmanned ground robots to the defense and security sectors.

One thing we like about their approach is that they apply the necessary financial rigor to the markets in the projects they pursue while remaining innovative. One project they previously worked on (but ceased because it was difficult to make the numbers work) was a robotic sea turtle, called the Transphibian. It had fins that enabled it to swim and maneuver in both shallow and deep water, and even crawl along the bottom of the ocean. They have also worked on “robot slime” for the government, which mechanically oozes like actual slime mold as it climbs up walls and across ceilings, and also on robots that have a softer, human-like grip…much softer than, say, the robots on the manufacturing line.

I think we will see much broader acceptance of robots when concepts evolve from being neat prototype ideas to real products that make a profound impact in people’s lives. These will be robots that help us do things better, faster, and with greater knowledge about the world around us. Ironically, they might even help us improve relationships we have with other people in remote locations, making us more human in the process.

Bio: Rhett K. Hunter is a vice president of T. Rowe Price Group, Inc., and T. Rowe Price Associates, Inc., a research analyst in the U.S. Equity Division, a vice president and Investment Advisory Committee member of the Global Technology Fund, Science & Technology Fund, and New Horizons Fund. Hunter received a B.A. in economics and Asian studies at Bowdoin College and an M.B.A. from MIT’s Sloan School of Management. He covers technology as a small-cap generalist.