What Is Anhydrous Ammonia, The Chemical At The Site Of The West, Texas, Explosion?

One of agriculture's most dangerous substances, anhydrous ammonia requires several precautions to handle. 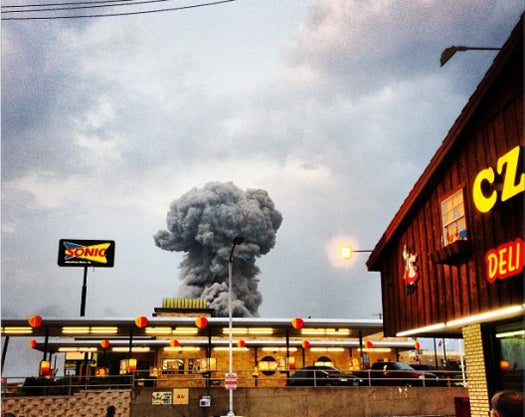 At least five people are dead and more than 160 injured after an explosion at an anhydrous ammonia fertilizer plant in the small Texas town of West. Anhydrous ammonia is a highly toxic, volatile chemical that may have exacerbated the explosion and can blind, suffocate, burn, and kill humans. What is it? And why is it so dangerous?

What is it?
Anhydrous ammonia is a widely used, efficient form of nitrogen fertilizer. When used in agriculture, it’s compressed into a clear, colorless liquid and stored at extremely low temperatures. In its natural form, in the open air, it’s a gas, so agriculturists use special equipment to compress and handle it, storing it in tanks that can withstand 250 psi. But outside of that tank, it quickly reverts back to its gaseous state. Contact with it as a liquid can cause severe chemical burns and inhaling it can cause damage to the lungs. The “anhydrous” portion of it–“without water”–refers to the fact that the chemical reacts with water, meaning the effects are especially damaging when they combine with the human body’s moisture, whether that’s in the eyes, lungs, or other parts of the body. When that happens, the reaction forms a highly basic solution that’s very corrosive.

Why is it used?
The same thing that makes it dangerous make it useful as a fertilizer. When injected into the soil as a liquid, anhydrous ammonia expands into a gas, where it’s more easily absorbed by the soil. Adding nitrogen to soil is a potent way of making the soil more fertile.

What’s the treatment?
There’s no specific treatment, but it’s recommended that anyone handling the chemical keep a nearby supply of clean water on hand. First aid procedure is to flush with clean water where the liquid meets the person’s body, to dilute the effects of the burn. (A small amount of body moisture can cause the corrosive reaction, but a large amount of water will dilute it.) In its gaseous state, the ammonia might be even more dangerous. Inhaling it causes the chemical to react with moisture in the lungs, potentially damaging the lung lining, causing respiratory problems and even death. In that case, the University of Minnesota recommends people provide “cardiopulmonary resuscitation if the victim is not breathing, and summon emergency medical assistance.”

Is it explosive?
Yes–under certain conditions, at least. It’s not, on its own, very flammable, but if there’s a leak of the chemical, it can ignite when it becomes about 16 to 25 percent of the air–a huge, usually detectable concentration–and reaches temperatures of at least 1,200 degrees Fahrenheit. Since it takes that much heat to ignite, the gas likely wasn’t the source of the fire, although it could’ve ignited and exacerbated it if the fire was caused by something else. The tanks are also stored at high pressure, so could become explosive during a fire. And in the case of the West, Texas explosion, there was a lot of the stuff: as much as 54,000 pounds.

Ask Us Anything
chemicals
chemistry
explosions