FYI: When Did People Start Inventing Things In The Garage?

Right after they invented the garage. 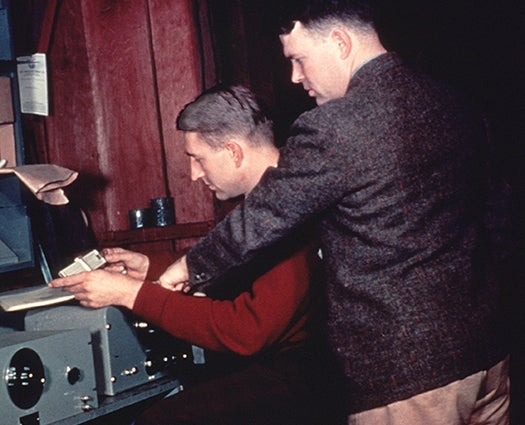 384280 03: Hewlett-Packard Company co-founders David Packard (seated) and William Hewlett run final production tests on a shipment of the 200A audio oscillator. The picture was taken in 1939 in the garage at 367 Addison Avenue, Palo Alto, California, where they began their business. Hewlett died January 12, 2001. He was 87. (Photo courtesy of Hewlett-Packard/Newsmakers). Hewlett Packard
SHARE

The modern garage first appeared in the 1920s, and inventors—of automobile parts, among other things—began to occupy them almost immediately. Walt and Roy Disney started making cartoons in a Hollywood garage in 1923; eight years later, an engineer named Gerhard Fisher started building his Metallascope metal detectors in a garage in Palo Alto, California; and in 1938, William Hewlett and David Packard rented their own garage space in Palo Alto. The Hewlett-Packard garage would become the most famous in the history of American entrepreneurship. In 1989, it was designated the “Birthplace of Silicon Valley,” an official state landmark.

Still, the archetype of the “garage inventor”—and indeed the phrase itself—did not catch on until the 1960s and ’70s. “The attached garage is really a postwar thing,” says Eric Hintz, a historian at the Lemelson Center for the Study of Invention and Innovation at the Smithsonian. He says that the structure gave moonlighting engineers in the developing suburbs a large, configurable space, where they might set up their tables and sawhorses.
Garage-style inventors predate the existence of garages, however. Before the 1920s, a part-time inventor might have dreamed up ideas inside the carriage house, which housed a family’s horse and buggy. In 1885, for example, Alexander Graham Bell, the inventor of the telephone, set up a lab inside the carriage house behind his father’s home in Washington, D.C.

These days, the garage has more symbolic meaning than utility. When Jeff Bezos was building Amazon in the early 1990s, he chose to rent a house in the suburbs of Seattle in place of a more conventional office space—he wanted to say that he’d started out in a garage. “Even if it is a construct, it works,” Hintz says. “It’s sort of a shorthand. It’s very romantic to say, ‘Here’s the garage.’ You can build a whole corporate culture around it.”