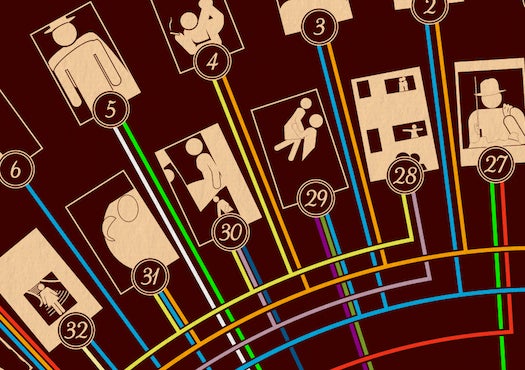 You probably have your own choice for Greatest Movie Of All Time. But what do the masses say? The Internet Movie Database (IMDB) has a set of picks, rated by users, that you can peruse. And if you want to know a little more about what kind of movie makes it to the top, this awesome visualization designed by Martin Kruusimagi can show you.

For the infographic, Kruusimagi color-coded the top 50 IMDB movies by genre: dramas are organized and counted with blue, while sci-fi gets brown. The colors then snake across the map until they reach the relevant movies, so a line of pink (comedy) reaches an illustration representing No. 43, Chaplin’s Modern Times. Multiple genres can be assigned to each movie, so Times also gets a light blue line for drama.

As you can see, drama is the most popular genre on the list (look how small comedy is!). Maybe that’s not surprising, since drama can encompass many more movies than, say, film noir, but it’s also interesting to think that movie-watchers (or at least IMDB voters) correlate seriousness with goodness.