How To Make Beer [Infographic]

Check out this beautiful 1933 brewing guide from the pages of Popular Science. 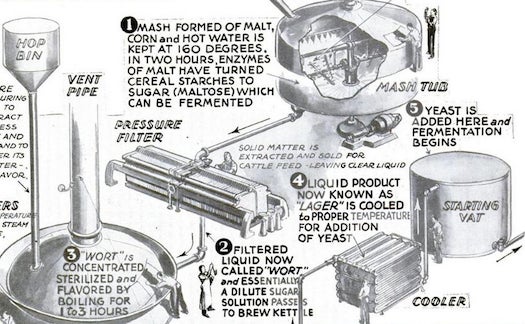 When the United States ratified the Twenty-First Amendment in 1933, Popular Science celebrated the end of Prohibition by getting completely wasted (probably) and publishing this lovely infographic on how to make beer. “With the removal of national restrictions against the manufacture and sale of beer, American brewers are again in action,” said our June 1933 issue. “Their operations represent one of the most extensive applications of modern industrial chemistry.”

Brewing beer hasn’t changed much in 80 years (and Popular Science still loves drinking it.) View the larger version of the infographic to see how the newly legal brewers turned barley into tasty, tasty beer.

Read “Beer Making Is Marvel of Industrial Chemistry” in our June 1933 issue.

This article originally appeared on PopSci.com on December 13, 2012.