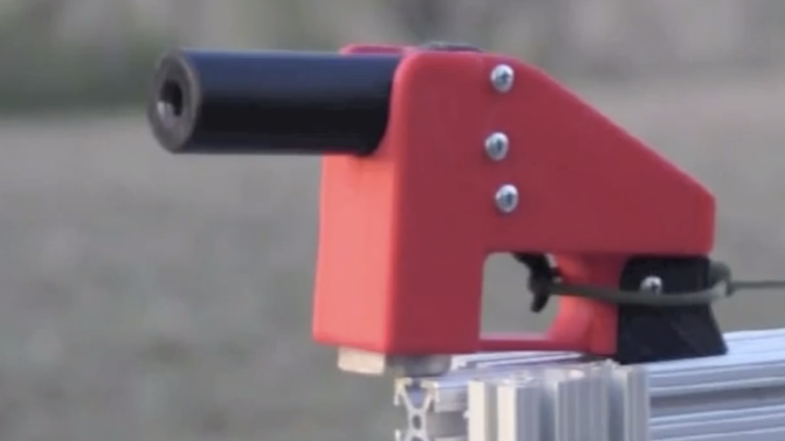 Defense Distributed’s plastic, 3-D printed “Liberator” single-shot handgun was here for a moment and then it was gone in more than one sense. For one, the news cycle turned over. Moreover, the State Department came down on Defense Distributed asking it to pull the CAD file for the Liberator off its servers until the lawyers could figure out if putting a free, downloadable CAD file up on the Web violated any arms export regulations. But the Liberator is back and–presumably to Defense Distributed co-founder Cody Wilson’s glee–it is evolving.

By the time the State Department asked Defense Distributed to pull down the CAD file for the Liberator, it was already replicating across the Web. And one of the people who appears to have gotten his hands on it is a Wisconsin engineer who identified himself to Forbes only as “Joe.” Joe has printed what he adorably calls the “Lulz Liberator” on a $1,725 Lulzbot A0-101 consumer-grade 3-D printer–a printer that is far less expensive than the industrial-grade one used by Wilson and company to create the original Liberator, which essentially was a disposable pistol–one shot and the barrel breaks, requiring the user to print another.

Joe’s Lulz Liberator–cost: $25–successfully fires eight rounds through a single barrel (and a ninth round through a replacement barrel) in the video below, proving that plastic guns have already leapt beyond the one-shot-per-print limitation. The Lulz Liberator is still a single-shot weapon–that is, it only holds a single round at a time–but it can be reloaded and fired multiple times using a single barrel.

Joe made his Lulz Liberator from PA-747 ABS plastic, a standard kind of ABS that is the working material for most consumer-grade 3-D printers. Yet he claims that it’s stronger than the more expensive stuff Wilson prints with in his larger, more costly Stratasys printer. Joe also augmented his version with a few components not found on the original Liberator, which is all plastic except for the firing pin made from a standard nail. The Lulz Liberator uses a metal nail for a firing pin, but also employs metal screws–available for pennies at your local hardware store–to hold the body of the firearm together rather than relying on plastic pins as Wilson’s does. And like Wilson’s, it contains a non-functioning piece of steel designed to bring it into alignment with the Undetectable Firearms Act.

The Lulz Liberator reportedly misfired several times during tests, and some of the screws and firing pins had to be replaced throughout the testing. Reloading is also no simple matter; each spent .380 cartridge expanded enough that they had to be pounded free of the chamber with a hammer. So it’s not like the Lulz Liberator is a rapid-fire, or even a semi-rapid fire plastic firearm.

What it is: A confirmation that Wilson’s Liberator design indeed functions the way he says it does, as well as proof that now that this thing is out there in the maker ecosystem it’s going to evolve independent of Wilson and Defense Distributed.

One key difference between Wilson’s Liberator and Joe’s Lulz Liberator: the Lulz Liberator design file is not available for download online and it’s unclear if or when Joe might release it into the wild. But it doesn’t really matter. Defense Distributed’s file is still circulating out there, and it’s unlikely Joe is the only maker out there tinkering with new ways to make better firearms from cheap plastic.