After a year at sea, Liquid Robotics' Wave Glider has set the record for the longest distance traveled by an autonomous robot. 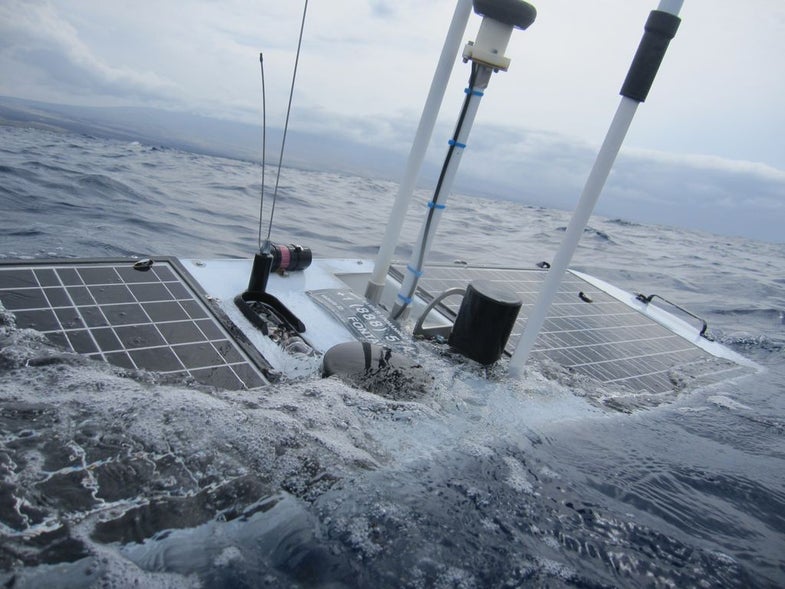 In November of last year, Liquid Robotics dropped four of its brand new Wave Glider robots in the water just off the coast of San Francisco with hopes of making history and learning a thing or two in the offing. Two of the robots would set a course for Japan and the other two for Australia, each destination roughly 9,000 nautical miles away. It was to be the longest journey ever taken by any autonomous vehicle, a slow but steady swim across the entire Pacific Ocean that would collect and relay high resolution oceanographic and atmospheric data all along the way, stopping only for a quick maintenance check-up in Hawaii–if they made it that far at all.

And so Liquid Robotics’ engineers dumped their robots into the rolling water and turned them loose, uncertain as anyone else whether the robots could survive the weather, waves, and wildlife they would surely encounter on a trans-Pacific crossing. There are sharks out there, after all. Massive waves and gale-force winds. There’s a whole lot of saltwater out there, itself a force for destruction and disruption of mechanical systems. And yet almost exactly a year after launching the Wave Glider known as “Papa Mau” navigated around the Great Barrier Reef and arrived off the coast of Queensland Australia last week, half a world away from where it started and only somewhat worse for wear.

“The level of torment the surface of the ocean can inflict on equipment is amazing.”Don’t lose the significance of this story in this milestone. Papa Mau and the three other Wave Gliders that are still out there paddling toward their destinations have certainly done something groundbreaking, but as with most inaugural journeys this one will soon pale in comparison to the impact of the voyages that will follow it. Liquid Robotics set out to prove that its Wave Gliders could spend months, even a year, traversing the ocean, beaming back data without stopping for so much as a cigarette (other than that short Hawaiian layover, that is). Having answered the key question about whether the technology can actually stand up to this task, Liquid Robotics can now address a much broader question: what do we want to know next?

“We always suspected that this kind of ocean crossing was possible, and we designed this platform to do it,” says Graham Hine, senior vice president of operations at Liquid Robotics. “But to actually achieve a 9,000-mile journey from the northern hemisphere to the southern hemisphere, that was the stretch goal for this platform. The wave-harnessing capability should be perpetual as long as there are waves in the ocean, but to demonstrate that the hardware can actually stand up to that is the biggest part of this technology demonstration.”

For those not up to speed on Wave Glider, a quick primer: Wave Glider is the first unmanned and autonomous maritime robot that draws its propulsive power solely from the ocean’s waves. The two part system consists of a float that rides on the surface of the water and a tethered submarine unit that moves beneath the surface roughly 23 feet below. Wave Glider doesn’t turn wave energy into power for motors or anything like that–the unique construction of the robot allows it to gain a little forward thrust with every wave that lifts the float unit (visual explanation here). It doesn’t move fast, but as long as the ocean continues to move so does the robot.

That makes Wave Glider ideal for a range of scientific missions, the kinds of data gathering expeditions that don’t need to move fast and in fact don’t want to. Solar panels spread across the float unit can power an array of instruments–in Papa Mau’s case, those include a weather station measuring air temperature, barometric pressure, and wind speeds, as well as a wave sensor recording height, period, and direction, a submersible fluorometer capable of measuring chlorophyll-A, and a CTD (conductivity, temperature, depth) payload also able to measure dissolved oxygen in the water. The sensor package wasn’t designed to discover anything in particular, but simply to create an unprecedented data set–refreshed every ten minutes and uploaded to the Iridium satellite network–as Papa Mau trudged across the Pacific. That’s more or less the entire idea behind Wave Glider: gather ocean data consistently and without interruption, until the end of time if possible.

Right now, in the wake of its successful 9,000-nautical-mile PacX (for Pacific Crossing) voyage, that looks more possible than it did a year ago. While Wave Glider doesn’t exactly cut through the water like a harpoon–it doesn’t even look very cool honestly, like a surfboard covered in solar panels towing an old analog TV antenna–it promises the unique capability to stay at sea indefinitely, or at least until something breaks down. The challenge for Liquid Robotics is to make sure that nothing does. But a lot can go wrong when one is alone in the middle of the ocean.

“The level of torment the surface of the ocean can inflict on equipment is amazing,” Hine says. The PacX Wave Gliders have now survived waves cresting at 25-feet, punishing exposure to sunlight, storms imparting winds that de-masted nearby sailing vessels, and even the curiosity of marine wildlife. One of Papa Mau’s sister robots had to have a piece of shark tooth removed from it during its Hawaiian stopover–it turns out the color of the protective paint Liquid Robotics chose for the robots is known as “bite me white” by some veteran sea captains Hine has spoken to.

But while some unexpected glitches have occurred–Papa Mau’s companion on the Australian leg of the journey has inexplicably traveled more slowly than Papa Mau, and one of the Japan-bound robots suffered a steering malfunction, for instance–the Wave Glider is proving to be the hardy oceangoing platform Liquid Robotics had hoped it would be. A test-bed Wave Glider hoping to prove out weather monitoring capabilities for the National Oceanic and Atmospheric Administration in the Gulf of Mexico loitered there for extended periods earlier this year. A second NOAA Wave Glider withstood the full brunt of Hurricane Sandy just prior to its making landfall off the coast of New Jersey in October. A now, Papa Mau has come ashore.

“When I pulled Papa Mau out of the water in Australia and looked at it, other than some paint fade–which you’d expect–and some accumulation of barnacles, the system was really ready to go back in the water,” Hine says. All of the critical systems, including the solar panels and electronics, remained healthy and ready for further deployment. 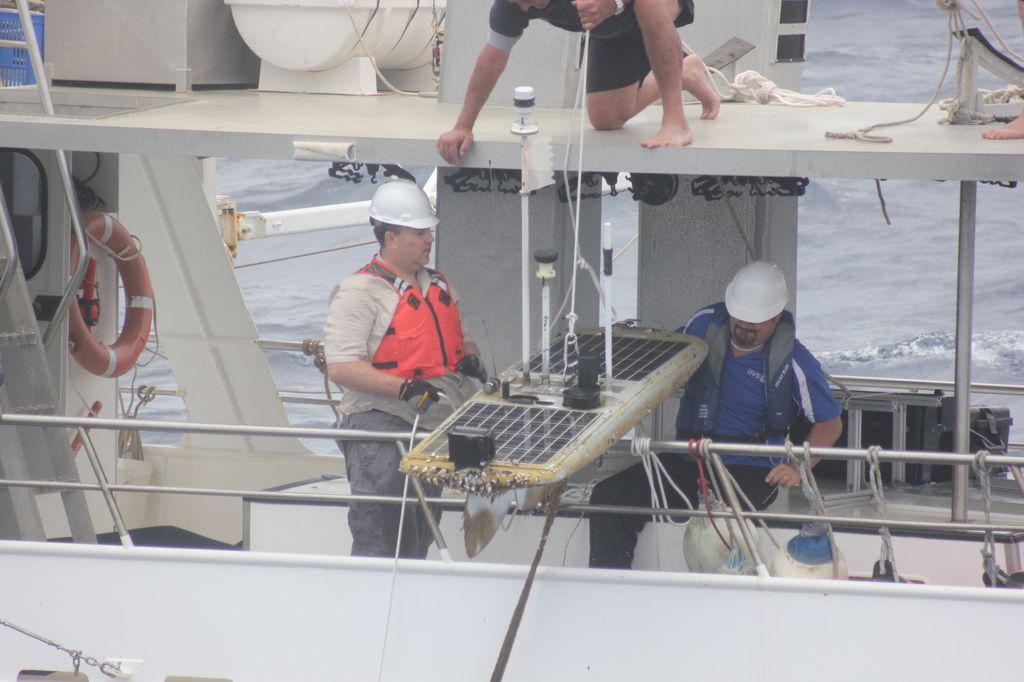 The PacX Crossings haven’t just proved Wave Glider’s resilience, but also its utility as a scientific data gathering platform. Its long-duration surface level readings of water and atmospheric characteristics have created an unprecedented body of high-resolution data that Liquid Robotics has made freely available on its Web site to anyone who wishes to use it for research purposes. Already, the PacX crossings are having a scientific impact. Papa Mau, for instance, traversed more than 1,200 miles of a massive algal bloom in the equatorial Pacific, returning reams of data on phytoplankton proliferation that is believed to influence both ocean ecosystems as well as the atmospheric carbon cycle. Usually research into these kinds of blooms is conducted from space via satellite. Papa Mau put research instruments right in the middle of it, and then stayed there for weeks.

In fact, Wave Glider has proven such a nice solution for oceanographic data collection that Liquid Robotics has gone looking for new problems to solve, offering up a $50,000 research grant (sponsored by BP) and use of a Wave Glider and support crew for six months to the research team that can propose the most productive and innovative science mission for the robot (five finalists are now under consideration for the prize). The company hopes that will ensure Wave Gliders continue to be put toward forward-leaning scientific research. It will also ensure that Wave Gliders are actively back in the water after the other three PacX robots reach their destinations.

After that, it’s unclear exactly what ambitious milestones Liquid Robotics’ Wave Gliders will pursue next. Hine says the company has been kicking around a few ideas, like circumnavigating Antarctica, traveling from North Pole to South Pole, or emulating Magellan’s historic circumnavigation of the globe, but those would be as much symbolic as scientific. What Liquid Robotics would really like to see is entire fleets of Wave Gliders answering the social call to better understand our oceans, our atmosphere, and the climate they impart to the planet.

“I’m really excited to see folks dig into the data sets and figure out how they can apply toward ocean science,” Hine says. “Understanding what the mid-ocean currents are doing–these are major drivers of our climate. We’ve had folks suggest that these algal blooms are significant and important to understand because they are a big atmospheric variable–they respirate and absorb carbon dioxide. I think the larger suggestion is that if one of these trips is this interesting, wouldn’t it be really interesting to see these measurements carried out continually?”

That’s the ultimate goal here: an ocean wired up with robotic sensors feeding a continuous stream of data back to shore, improving everything from climate and weather models to oceanographic mapping to management of natural fisheries to the efficiency of commercial shipping–in essence improving our knowledge of and relationship with the oceans that sustain life on this planet. It’s not unfeasible, and as Papa Mau has proved the technology is here today. “Compared to crossing ships out there, putting a few robots in the water is very inexpensive, and you can get extremely interesting and pertinent scientific data back,” Hine says. “That can help us understand our world.”