An Annotated Guide To Mining The Seafloor

Remotely operated excavators for mining in the abyss 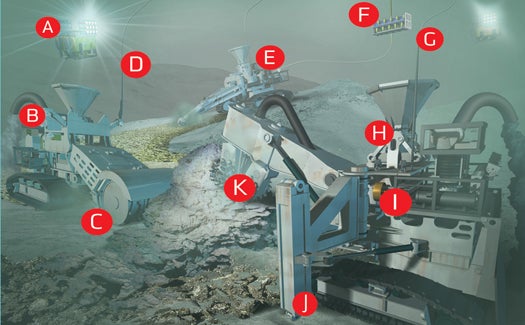 Centuries of underwater volcanic activity have blanketed the ocean floor in precious metals. Now, with the aid of the world’s most powerful excavation machines, a company called Nautilus Minerals is set to begin extracting those metals from the first large-scale deep-sea mine. The Toronto-based firm teamed up with the deep-sea trencher specialist Soil Machine Dynamics to build three remotely operated machines. Hybrids of land excavators, sea robots, and vacuum cleaners, they will work together to harvest rock from the seafloor, smash it into bits, and then send it to the surface.

Last year, Nautilus won a 20-year lease from Papua New Guinea to mine in the Bismarck Sea. The company’s first customer, Tongling Nonferrous Metals Group of China, has already claimed the entire contents of the first site, Solwara 1, which is roughly the size of 21 football fields and contains 240,000 tons of copper and 25,000 pounds of gold, plus silver and zinc. Although metal prices fluctuate, the total take could approach $3 billion. Nautilus plans to put its machines to work by the end of next year.

HOW TO MINE THE SEAFLOOR

1. From a ship on the surface, a crew sends down remotely operated vehicles (A) to do final surveys and help install 14 sonar buoys, which will track the three mining machines to within 1.5 feet.

2. Workers lower each machine to the seafloor a mile below using a pair of steel cables. One cable provides support (G). The other contains communication, power, and navigation lines (D). During the 1.5-hour descent, operators orient the machine by firing its thrusters (I).

3. Once on the ocean floor, the machines move on Caterpillar-style tracks (J). They send HD video and 3-D sonar maps back to operators aboard the ship.

4. The auxiliary-cutter machine (H) harvests rock from steep and uneven areas on the seafloor. Two hundred tungsten-carbide teeth (K) mounted on an adjustable boom chomp the rock into small pieces. The bulk-cutter machine (B) follows behind, harvesting rock from flat areas using a rotating cylinder (C) equipped with three-inch teeth.

5. Both cutters grind the rocks to under two inches in diameter and then suck them through their bodies, where internal sensors measure the rubble’s density, speed of flow, temperature, pressure, and vibration. After that, the cutters deposit it on the seafloor. The process is slow—the cutters will move at about three feet a minute—so the company plans to operate the machines 24 hours a day.

6. The collecting machine (E) follows the cutters and delivers the wet rock slurry to an external 150-ton pump (F) suspended near the ocean floor, which propels the material to the surface through a rubber pipe reinforced with steel and Kevlar.

7. On the ship, a dewatering plant filters the rock slurry and spins it dry. Workers then load the material onto a barge to bring it to shore
for refining.