And that infamously missing "a" was supposed to be there. 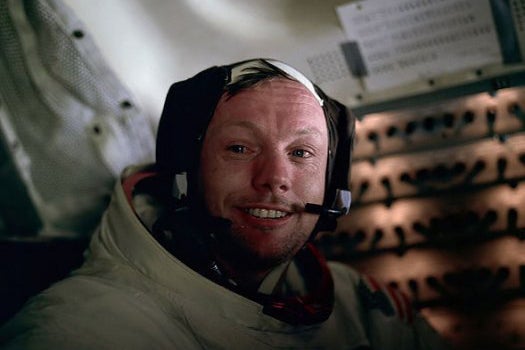 Neil Armstrong always maintained that he’d thought up possibly the most famous line in American history just after landing on the moon, but in an interview with The Telegraph, his brother says the origin story starts months before the landing, back on earth, and with a game of Risk.

Dean Armstrong said his brother invited him to play a round of the game, then casually slipped him a note to get his opinion on the subject. The note said, “One small step for A man, one giant leap for mankind.”

People have long debated the missing “a” in that first clause–“It should be A man,” someone is saying to someone else somewhere right now, probably–and there’s speculation Armstrong either messed it up or, as the man said himself, the message didn’t come through clean back on Earth.

Some assumed that if he did flub it, the quote might’ve been spontaneously thought up, and Neil Armstrong went along with that narrative. This story from Dean Armstrong would contradict that version of history.

Either way, that “a” isn’t much of a change, even if it would’ve made the sentence technically correct. But there’s something that makes the “right” version a little less special to my ears, somehow less dense. Maybe that’s just the weight of history.