Watch A French Researcher Control A Robot With His Brain

An electrode cap and computer program can translate brain signals into commands for a humanoid robot. 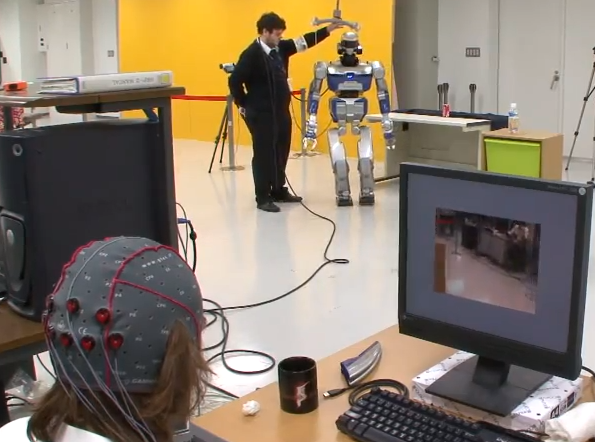 Roboticists at the CRNS-AIST Joint Robotics Laboratory, a collaboration between the French National Center for Scientific Research and the Japanese Institute of Advanced Industrial Science and Technology, are trying to interpret brain waves into actions that can be understood by a robot. In the video below, a volunteer wears an electrode cap and watches a screen with flashing dots, which is used to teach his brain to associate flickering objects with actions. By focusing his attention, he can induce actions, which are translated from his brain activity into robotic motion.

A signal processing unit on a computer translates his brain activity and classifies it into a series of tasks. Then the team can instruct the robot on which task to perform. It could help paraplegics who can’t perform certain tasks on their own. Or it could be used for crazyfuture tourism, says Abderrahmane Kheddar, director of the JRL: “A paraplegic patient in Rome would be able to pilot a humanoid robot for sightseeing in Japan.”