This Robot Vomits So You Won’t Have To

Larry the humanoid vomiting simulator is not the most glamorous robot we've covered. 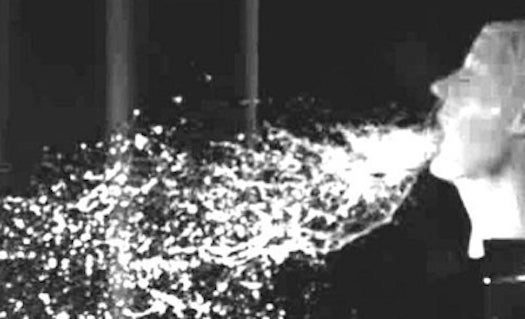 Sometimes inventions, even the important ones, aren’t pretty. Case in point: this vomiting robot. It could help us understand, and then battle, an illness that no one’s found a cure for in 40 years. Even if it’s not the cutest ‘bot out there.

The unfortunately but appropriately named Vomiting Larry is an anatomically correct model of a freshman at a frat party and, more importantly, an anatomically correct model of someone vomiting after contracting norovirus, a nasty bug that causes puking and diarrhea. It spreads fast–less than 20 virus particles can infect someone–and it’s been a higher-than-expected year for infections.

For the most part, the virus isn’t especially serious; people usually kick it in a few days. But for a lot of reasons, including the fact that we’re unable to grow human norovirus in a controlled environment, we have to study the spread of the virus in other ways. That’s where good ol’ Larry comes in, helping us to model how puking could spread the illness. The spray can travel nearly 10 feet (!), and when even a tiny bit of the stuff can be enough to pass the disease on, it’s important to get a grasp on exactly how the virus travels. It’s widespread, too: 21 million cases are estimated in the U.S. annually, and the only virus more commonly reported is the common cold.

BBC has some video, and Larry comes in at around 2:43. (Spoiler alert: it’s kind of disgusting.)