Roku, makers of, you know, the Roku, introduced a new product this morning, to be called the Streaming Stick. It’s...

Roku, makers of, you know, the Roku, introduced a new product this morning, to be called the Streaming Stick. It’s a teeny little device that looks mostly like a Roku-branded USB flash drive, but instead of a USB plug, it has a particular kind of HDMI plug. You plug it right into your HDTV’s HDMI port, and, theoretically, you have a brand-new connected TV that you can even control with your regular remote.

So this is a pretty cool idea; it’s not a wild step forward over, say, the current-gen Roku 2 XS (reviewed here), which is, as its name suggests, ridiculously small, but the Streaming Stick would definitely streamline matters a bit. It’ll take up no space at all in your entertainment center, require no additional power supply to crowd your outlets nor an HDMI cable to muck up your perfectly minimalist TV Room of the Future, and you’ll be able to control it with your TV’s remote, rather than a separate Roku remote. All great! And Roku has somehow managed to cram an entire Roku’s guts into this tiny thing, including the processor, memory, and Wi-Fi antenna. 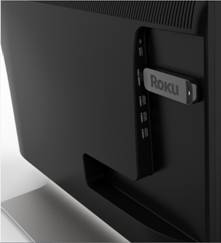 On the other hand, there’s a reason why Roku hasn’t announced a price or release date yet, not even a rough estimate. The Streaming Stick will require a special, very new kind of HDMI port, which will probably be branded as “MHL-compatible.” MHL stands for Mobile High-definition Link, which is designed to let connectors on an HDTV provide certain new features, like delivering power to a gadget, or allowing that gadget to be controlled with the TV’s remote, in addition to the usual uncompressed 1080p video and 7.1 surround sound compatibility. MHL is essential for the Streaming Stick to work; plug it into a regular HDMI port, and you won’t get enough power to even turn the thing on.

And MHL is so new that it’s only been available for three months, on a very small number of TVs (like, three or four). And those TVs, because they’re high-end enough to pack this brand-new tech, are also high-end enough to already have built-in Wi-Fi and, in the case of this $3,500 Samsung, a whole bunch of the Roku’s key apps, like Netflix and Hulu. Roku already has Insignia, Best Buy’s house brand, on board to release a Streaming Stick-compatible line sometime this year, but it’s a long ways from the kind of “plug into any TV!” compatibility we’d like.

Still, we like Roku, and this is a cool idea, provided MHL takes off the way Roku seems to be betting it will. Roku says it’ll be released in the second half of 2012, and may be sold separately or bundled in with TVs.