Give me this phone 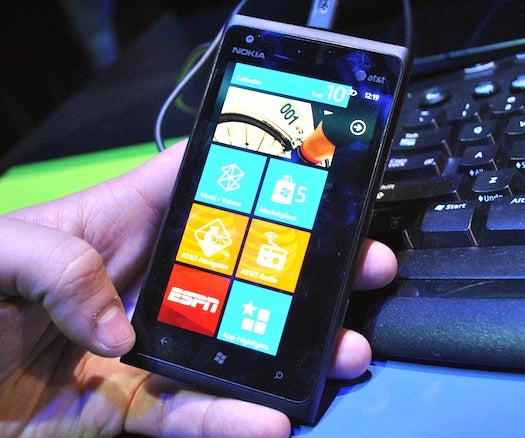 I just got back from Nokia’s booth here at CES in Las Vegas, where things are decidedly focused on Windows Phone. And with good reason; the Lumia 800, which is available in Europe and on other continents in which I do not live, is the best Windows Phone on the market, and the new 900, announced officially just yesterday, is set to become the best Windows Phone in America. I played with the Lumia 900 for a little while, and came away reassured: this phone is just as good as I expected.

The Lumia 900 differs mostly from its predecessor in size. It’s a 4.3-inch-screened phone, compared to the perfectly usable but slightly small Lumia 800, which clocked in at 3.7 inches. There’s a slight sacrifice in aesthetics with that; in the 800, there was this cool effect where the curved screen seemed to fade away into the body of the phone, sort of like an infinity pool, due to the curved glass front and lack of visible bezel. The 900, on the other hand, does have a bezel–the Nokia rep told me they were a little unsure about how folks would respond to it. I found it not quite as nice-looking as the melty screen on the 800, but not glaring enough that it really takes away from the rest of the phone.

The rest of the phone, of course, is great. The extra screen size is ideal for Windows Phone, which seems to thrive in the extra real estate. The screen itself is an AMOLED with some kind of technology Nokia’s calling ClearBlack. Whatever it is, it seems to work; phones with the Lumia 900’s resolution (800×480) and size (4.3 inches) often seem kind of pixelly, but the Lumia looked great, with deep, dark blacks and clear lines. The largely black-and-primary-colors Windows Phone OS looked fantastic. 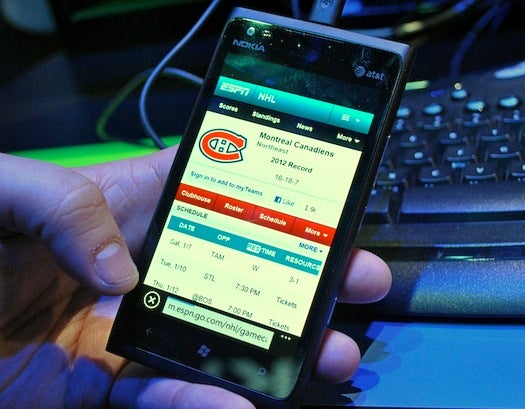 I also briefly took a look at the new ESPN app; Nokia will be preloading the ESPN “hub” on the Lumia 900. Hubs are kind of large-scale apps in Windows Phone, with a whole bunch of different sections and elements. The ESPN hub looks really great, despite being in some sort of pre-release state. It’s got some nice social elements for finding sports chatter online, and it sorts by sport and then by team so you can get all the latest details on the team you follow. You can also buy tickets and get directed to the stadium, right from that app. All of those latter features are exclusive to the Lumia 900.

My only real concern is that it has the exact same camera sensor as the Lumia 800, which was disappointing, But software can fix a lot of problems in a phone camera, so it’s possible they’ve made some tweaks.

I’m pretty excited about this phone–it’s basically a bigger version of the Lumia 800 that works on an American LTE network, so it’s got every opportunity to be one of the best phones in the country. It’ll be released “in the coming months.”