Your Guide to the Digital TV Conversion

Broadcasters expect to be ready, but your old faithful antenna might not be. Here's what you can do to avoid sitting in the dark next year 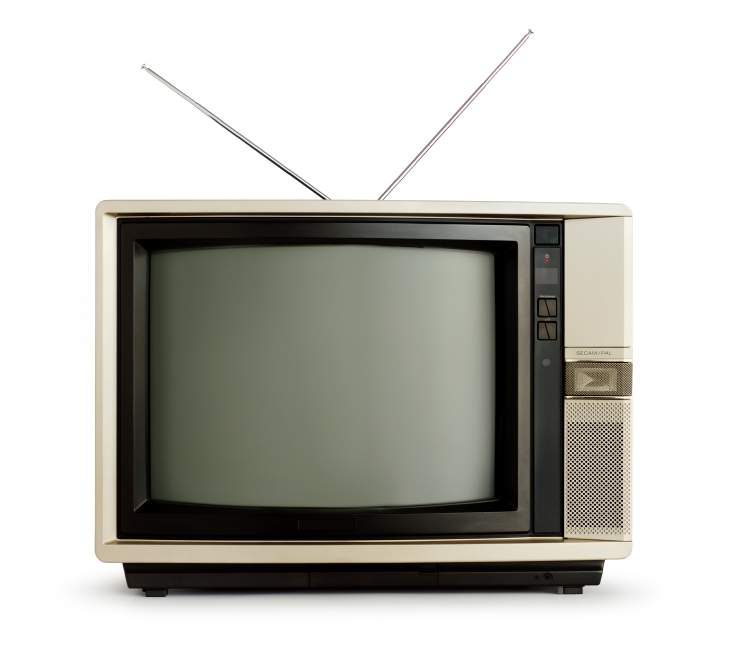 An article in last week’s New York Times must have struck terror into the hearts of readers whose old tube televisions sport rabbit-ear antennas. The punchline: Many of them will be staring at a black screen after next year’s transition from analog to digital television broadcasts—even if they purchased a government-subsidized converter box. And broadcasters are to blame.

The real story, though, is more complicated and harder to predict. So what will happen to your television on February 18, 2009?

If you’re paying for TV service, nothing will change. The digital conversion has no effect on cable or satellite broadcasts. Comcast or Direct TV will be happy to continue taking your money. The transition affects only the free, over-the-air radio signals people get with an antenna.

In other words, it will mean nothing to most Americans.

But a good chunk of people—21 million households, according to the Times—will be affected. If they have an analog TV—virtually any set made before 2000 and almost any picture-tube model made afterwards—and only watch free over-the-air broadcasts, the screen will go ebony, unless they buy a government-subsidized digital-to-analog converter box.

You may need more than a box

All that is old news. Here’s the new part: A converter box by itself might not be enough. You might also need a new antenna—possibly an attic or rooftop model, and maybe even a signal amplifier.

The Times article was based on data from market research firm Centris which, the paper said, had “found gaps in broadcast signals.” But that’s not how Centris tells the story. “I’m not saying they won’t get coverage,” the company’s senior vice president Barry E. Goodstadt told me. “I’m saying they won’t get coverage unless they put a new antenna in.”

As far as broadcasters are concerned, they are doing their job if they send out a signal that anyone can get using the right antenna—but that might not necessarily be the antenna you currently have. “Our idea is to get the idea of antennas out on the table,” said Mr. Goodstadt, who feels that the federal government is ignoring that topic and falsely assuring people that all they need is a converter box.

Even experts like Goodstadt concede that we won’t really know how the digital conversion will shake out until it happens. But you can find out today if you are likely to have trouble.

Centris based its research on data from the Web site antennaweb.org–a service run by the Consumer Electronics Association. On the site, you’ll find a form where you fill in your address and a few other details about where you live. Then the page spits out a list of channels—both analog and digital–that you’ll be able to get with a rooftop antenna. As Antennaweb explains “Due to multiple variables in determining good reception in a specific location with indoor antennas, these antennas are not included in this mapping system.”

So there is no guarantee that an indoor antenna will work, but look closer at the results. First click “Show Digital Stations Only.” That’s what we’re interested in. The results show not just what channels you’ll be able to get, but what size antenna you’ll need to get them. For my apartment in lower Manhattan, I can get every major channel, except NBC, using the smallest type of outdoor antenna—color-coded yellow. In fact, my urban setting is a prime scenario for an indoor antenna. Communications company Harris which just concluded a nationwide survey of TV broadcasters, says that indoor antennas are most likely to work in urban settings, within a 10-mile radius of the transmitter. 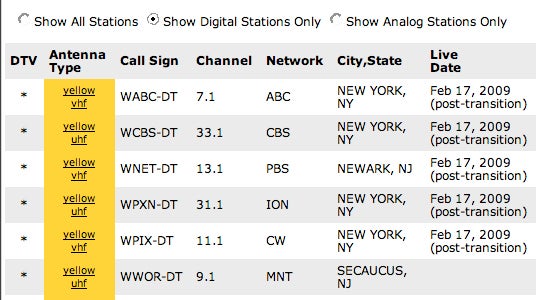 There’s another way to predict if your set will work with a converter box and digital signals. Look at how well it currently picks up analog broadcasts. Do you see crisp images on your screen or fuzziness and perhaps some “ghosting” – a second set of images that resembles a double exposure in photography?

If it’s fuzzy of ghosted, your antenna probably isn’t up to snuff. “Some people have watched these kinds of pictures for years. And to them, that’s television,” said Jay Adrick, VP of broadcast technology at Harris. “They’re going to have problems, because they’re actually beyond the measured coverage range.”

In the analog world, even a signal that’s technically too weak might still put something on the screen. Not so for digital. At best, you’ll probably get an image that occasionally breaks up into what resembles a mosaic missing a bunch of tiles. At worst, you’ll be staring at a blank screen.

If you don’t want to climb up on the roof to install an antenna (and who does?) or you can’t climb up there (if you live in an apartment), try the indoor options first. On Antennaweb, notice that they tell you not just what size and shape antenna to get but also what frequency ranges it receives: UHF or VHF. No need to become an expert in physics. Just keep this in mind: In most cases, you’ll want an antenna that picks up both UHF and VHF frequencies to get all the channels in your area.

One other thing to remember: There is no such thing as a digital antenna. “That’s a great marketing scheme,” said Jay Adrick from Harris. “There’s no difference between an antenna that was designed for analog and one that was designed for digital.” Radio waves and antennas work the same whether they are carrying analog data, digital data, or both. So don’t pay extra for an antenna just because it’s advertised as being “digital.”

Instead, choose an antenna with a built-in amplifier to boost the strength of whatever signal it does pick up. And consider how well it will fit in your house. Most antennas look like something that would be hanging from a space probe, but others are more subtly stealthy, hidden inside a picture frame, for example. Of course, The uglier antennas perform better, but if you live close enough to a receiver, a smaller antenna might work.

If your analog channels (both VHF and UHF) come in crisply, chances are the digital ones will, too. Of course, you can also pick up a converter box now to see if you can pull in the channels that are already broadcasting in digital. Dozens of converter models are already on the market, selling for about $40 to $80. Before you shop, sign up for a government voucher and check the site for a list of models that are certified to work.

But remember, those signals may get a bit stronger after the transition—when broadcasters take down their analog equipment, put up bigger digital antennas, and crank up the transmission to full power.

A digital set (whether it’s high-def or standard) is unlikely to work any better than an analog model with a converter box. If there’s a reception problem, it’s probably the antenna.

But here’s the silver lining about digital TV broadcasts: If you do have the right antenna, you can get scads of great TV for free. Even a standard-definition TV (with a converter box) will probably pick up more channels because of multicasting.

In the same amount of bandwidth that held a single analog channel, digital can squeeze in multiple channels. So in addition to getting Fox or ABC from your local broadcaster, you might also get 24-hour weather and traffic channels, at no extra charge. Speaking of traffic, stations may also offer broadcasts that are specially formatted to be receivable in your car –either by handheld devices or in-dash displays. (No word yet on how getting that service affects your auto insurance rates.)

And if you have an HDTV (in your living room, not your Toyota) the best thing about digital is that it brings you glorious high-definition TV for free. Just like old analog reception, HDTV is free from all the networks and PBS. So, if you do have to put up a new antenna, at least you’ll get not only the low-res reruns of I Love Lucy on public access, but also crisp, widescreen showings of the Superbowl, American Idol or any other current HD fare.