Living in the Future: Play Any Song, Anytime, Anywhere

The future of music, and a hangover 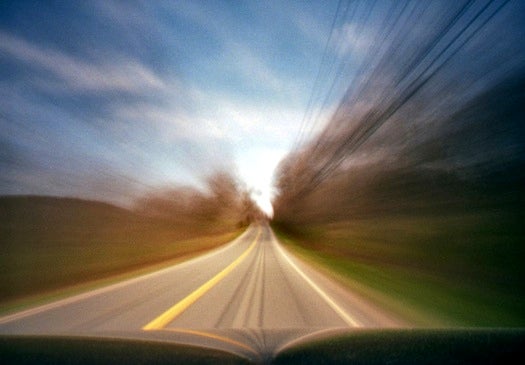 Living in the Future is a new column about those rare moments, as we go about our daily lives, when we realize that what we’re doing is amazing. These days, we have a tendency to assimilate new tech into our lives without giving it much thought, much less gratitude, as Louis C.K. reminds us. But every once in awhile, we’re struck by a moment, as visceral as it is literally incredible: “Wow. I can’t believe this is possible.”

A few weeks ago, I went on a road trip up to the Berkshires, in western Massachusetts, near the Vermont border. The car, one of those odd little Volvo hatchbacks, was packed full of camping gear, food, beer, and four people entirely too tall to be sitting in a car the size and shape of a bathtub. We were all hungover, a necessary next-day result of meeting college friends and “showing them New York.” Between the two front seats was a banjo. On every lap was a jumbo-sized Gatorade.

But we needed music.

The Volvo has a nice stereo, we discovered in between listening to the how-is-it-that-loud pounding in our heads. In the car were CDs left over from high school–Wilco, The Rolling Stones–but also an auxiliary-in jack, for plugging in any kind of gadget that can play music. “Dan,” my roommate weakly bleated from the back seat. “Do you have that song I like?” I knew what she meant–an old Allen Toussaint song we’d listened to the night before–and in the old days (like, two years ago), I wouldn’t have been able to play it. It’s not in my regular rotation, and I wouldn’t have taken up precious storage space on my phone for a song I listen to that rarely. But I didn’t need to. I opened up the Rdio app on my phone, searched for the song, tapped Play, and we all settled back to mentally combat the nausea that the torn-to-shit Brooklyn roads only exacerbated. “Jesus Christ,” I thought, through the grape-Gatorade-flavored haze. “I can’t believe I can just think of a song, any song, and play it. This is like a superpower.”

Rdio is one of several subscription music services that are, in broad strokes, pretty much the same. You pay a pittance a month, usually $10 for full access (which includes stuff like mobile apps and offline downloading), and then you can listen to an unlimited amount of music from a catalogue of millions upon millions of songs. Spotify, MOG, Rhapsody, Rdio–there are differences between them, but those are less important in the big picture than the fact that they exist at all.

Rdio lets you bounce around, trying new artists, in ways that have never been possible before. The artist you’re listening to at that second also has a biography, a complete discography (often satisfyingly deep, especially in b-sides, live albums, and rarities collections), and a list of similar artists, artists that have been influenced by and were influences of whatever is playing at that second. You can jump from song to song, album to album, genre to genre, like you would on Wikipedia: follow the trail from The Who to Big Star to Matthew Sweet to Zumpano to the New Pornographers, and find out that the second rhythm guitarist in the New Pornographers has two great solo albums. Or use the recommendation service, or the Pandora-like “radio station.” Or just look at what your friends are listening to–these services are all deeply intertwined with Facebook and Twitter, and it couldn’t be easier to recommend or receive recommendations from people you actually know. For music fiends, it’s like stepping through a door into a totally new world: suddenly, everything you’ve ever wanted to listen to is there, and you have the tools to find it. 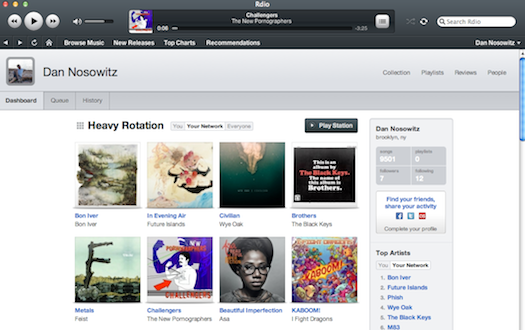 Having access to essentially every song you’ve ever heard of, all the time, pays off in unexpected ways. Some scenes: I’m at a friend’s house. She has no stereo, just a laptop (which is depressing in its own way), and she doesn’t have the song I’m currently obsessed with. I open up her web browser, go to Rdio’s website, sign in, and bam: that song, and every other song, is there. Or: My college roommate lives in Texas. I live in New York. Yet we’ve collaborated on a playlist–both of us can add any song to it, and listen at any time on our computers or phones–that caters to our need for instrumental pop music while we work or study. Or: I’m trying to learn by ear the piano intro to that K-Ci and Jojo song that was a mainstay at middle school dances (look, you attract ladies your way, I’ll do it my way). I can sign in to Rdio and play it without downloading it, or buying it, or repeatedly reloading the YouTube video for it. Of course, now all my online friends know that I listened to it sixteen times in a row, but them’s the breaks.

Music subscription is the future of music. Ask anyone who takes music seriously, really seriously–the most annoying person you can think of, basically–who also uses one of these services, and they’ll tell you the same thing. This is how we’ll be listening to music in the future. Of course, we can’t ignore that artists earn basically no money from these services, especially smaller artists–it’s clear that the system for paying royalties will need a complete overhaul once these services get more popular. But there’s surely a way to do that, and we’re looking forward to the time when we can get the benefits of instant access to all music, while artists get the proceeds.