There’s always been a lot to love about a pico projector. A palm-sized device that can port video from anything from a laptop to an iPod onto a large projected screen? Sign me up. Until now, though, picos only came is two forms: as a standalone box, or strapped onto the back of a device like a smartphone, rendering the gadget bulky and extremely power inefficient. Enter MicroVision’s PicoP Gen2 projector, debuting this week. The PicoP Gen2 is among the smallest pico system we’ve seen, and it’s incredibly power efficient–perfect for embeds in multi-function devices. Oh yeah, and it’s 720p high-def, too.

To start, the entire PicoP Gen2 setup is wafer-thin (about 6 millimeters)—I’d wager about half the size of the gen-one product. But MicroVision has crammed much, much more onto that small piece of hardware. The addition of a green laser (in addition to red and blue ones) brings the color gamut up to 64,000, while MicroVIsion’s newly-updated mirrors reflect up to 25 lumens. The kicker, of course, is the ability to project a 720p image as large as 20 feet across.

It’d be quite a shame for all that power to go to waste in simple standalone projectors. Naturally, MicroVision is talking to a number of OEM partners to get the PicoP Gen2 into more devices later in 2012, but there’s no official comment as to what, when, and how much. The company’s reference designs, though crude (read: projector setups literally strapped onto existing devices), do get the point across. First up was a PicoP attached to a Roku XS box, which could become a roving Netflix and Hulu showcase, if not a way to play large-screen Angry Birds anywhere. The company also showed us an OnLive cloud gaming demo; with a projector resting atop an Onlive console—itself about the size of a hard drive—the makeshift system became a mobile arcade theater.

Knowing that the PicoP Gen2 will likely project onto some rather rough walls and shabbily-hung sheets, MicroVision engineered the system to display consistent images on any surface. The engine, unlike most mobile projector solutions, renders each pixel of its 720p image one-by-one, which means that the image won’t warp if it’s on an uneven surface; pixels will land flush on whatever they hit. MicroVision showed us a quick demo of this using a 360-degree magic-carpet game; the player stands in the middle of the room, floating the rug and rider across the walls, floor and ceiling. As promised, the image never fractured or lost integrity.

Aside from smoothing images on rough surfaces, the PicoP’s pixel-by-pixel image-rendering allows for quick projected touchscreens. When a user points at the projected image with a stylus, the projector interprets the point as a mouse-click. Because it is seeing which pixel path has been interrupted, instead of constantly mapping the image plane as similar devices do, the PicoP requires no calibration to work. This mapping system is also less taxing on the processor, so whatever device the projector is emended into will still have somewhat decent battery life. 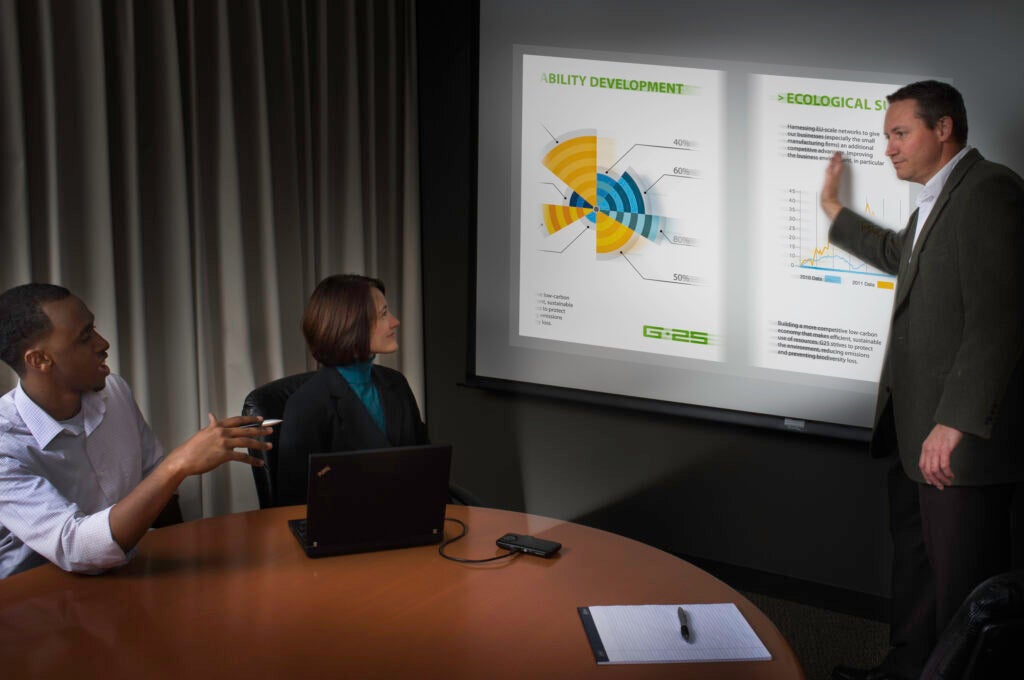 MicroVision expects products running the PicoP Gen2 projector to begin hitting the market in the second half of 2012.