Lasers Can Be Used to Steer Lightning In Mid-Strike

Laser light can not only trigger lightning but redirect it, causing it to strike in the same place over and... 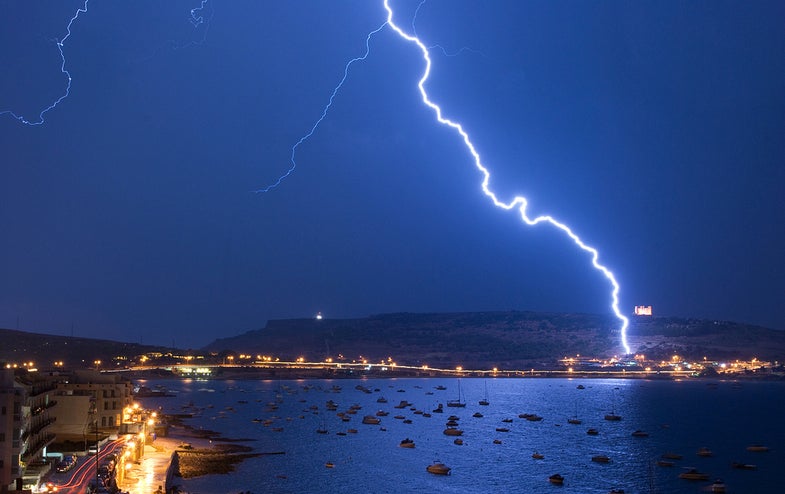 Laser light can not only trigger lightning but redirect it, causing it to strike in the same place over and over, according to new research. This means lasers could serve as lightning rods. Because that would be awesome.

Laser lightning rods have been a research subject for several decades, because they could trigger lightning and guide it to a specific place. Firing a laser would create an ionized channel in the atmosphere, which could conduct the lightning to the ground. Laser lightning rods could be an alternative to lightning rockets, according to Aurlien Houard of the Laboratoire d’Optique Appliquée in Palaiseau, France, a co-author of this study. Lightning rockets can apparently trigger a lightning strike by bringing a conductive material, like some type of salts, toward the static layer of a thunderhead. But a laser would be easier to control than a rocket.

A team of French researchers set out to test how well lasers can harness and control lightning. They sent a laser beam past a spherical electrode toward an oppositely charged flat electrode. The laser stripped away the outer electrons from the atoms in its way, ionizing the pathway between the electrodes and creating a plasma filament — like lab lightning — that channeled an electrical discharge from the flat electrode to the spherical one.

Then the team added a longer, pointed electrode to their set of electrode shapes and watched what happened. Left to its own devices, lightning follows the path of least resistance, striking the first thing it comes across — in a thunderstorm, that’s the tallest thing, and in this experiment, it’s the nearest thing. With no laser lightning rod, the discharge predictably hit the tall pointed electrode first. But when the researchers used the laser filament to guide it, the electrical discharge followed the ionized path and hit the spherical electrode instead.

The team found they could pull this off even after the discharge was already on its way, meaning they could divert the path of lightning. The research appears in the American Institute of Physics journal AIP Advances.