Boeing has just announced it successfully tracked and shot down an unmanned aerial vehicle with a laser weapon. Actually, it... 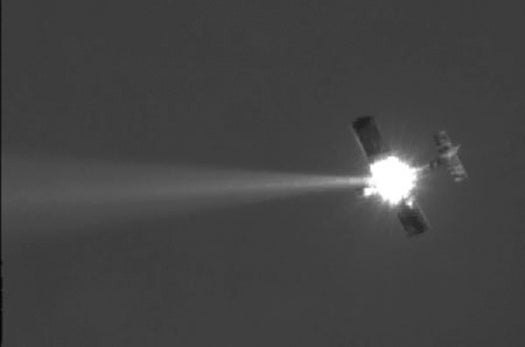 Boeing’s MATRIX high-energy directed weapon knocks a UAV out of the sky.

Boeing has just announced it successfully tracked and shot down an unmanned aerial vehicle with a laser weapon. Actually, it shot down five UAVs at various ranges with the trailer-mounted Mobile Active Targeting Resource for Integrated eXperiments (MATRIX).

Developed at the request of the Air Force Research Laboratory, MATRIX integrates with standard test-range radar, focusing a single energy beam on moving aerial vehicles and blasting them out of the sky. It’s the future of aerial seek and destroy, defending against always-orbiting unmanned craft.

Just to ice the cake, during the tests (which occurred this May in California) Boeing also shot down one more UAV with its Laser Avenger system, a hybrid laser/kinetic weapons system sporting both a directed energy weapon paired with a 25-millimeter machine gun. After all, if the laser’s quiet, stealthy effectiveness doesn’t strike fear in the robotic heart of the enemy, a barrage of large-bore machine gun rounds certainly will.