How It Works: The Flying Laser Cannon

Boeing's new laser cannon can melt a hole in a tank from five miles away and 10,000 feet up—and it’s ready to fly this year 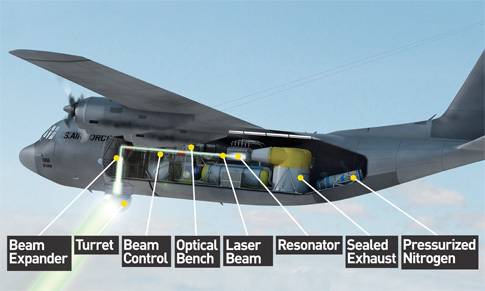 Creating a laser that can melt a soda can in a lab is a finicky enough task. Later this year, scientists will put a 40,000-pound chemical laser in the belly of a gunship flying at 300 mph and take aim at targets as far away as five miles. And we’re not talking aluminum cans. Boeing’s new Advanced Tactical Laser will cook trucks, tanks, radio stations—the kinds of things hit with missiles and rockets today. Whereas conventional projectiles can lose sight of their target and be shot down or deflected, the ATL moves at the speed of light and can strike several targets in rapid succession.

Last December, Boeing, under contract from the Department of Defense, installed a $200-million prototype of the laser into a C-130 at Kirtland Air Force Base in New Mexico in preparation for test flights this year. From there it will go to the Air Force for more testing, and it could be in battle within five years.

Precise control over the beam’s aim allows it to hit a moving target a few inches wide and confine the damage to that space. The Pentagon hopes such precision will translate into less collateral damage than even today’s most accurate missiles. Future versions using different types of lasers could be mounted on smaller vehicles, such as fighter jets, helicopters and trucks.

How to Melt a Tank in Three Seconds Or Less

1. Find Your Target
When the C-130 flies within targeting range (up to five miles away), the gunner aims using a rotating video camera mounted beneath the fuselage. The computer locks onto the object to continually track it. A second crew member precisely adjusts the laser beam’s strength—higher power to disable vehicles, lower power to knock out, say, a small power generator. The gunner hits “fire,” and the computer takes over from there.

2. Heat Up the Laser
In a fraction of a second, chlorine gas mixes with hydrogen peroxide. The resulting chemical reaction creates highly energetic oxygen molecules. Pressurized nitrogen pushes the oxygen through a fine mist of iodine, transferring the oxygen’s energy to iodine molecules, which shed it in the form of intense light.

3. Amplify the Beam
The optical resonator bounces this light between mirrors, forcing more iodine molecules to cough up their photons, further increasing the laser beam’s intensity. From there, the light travels through a sealed pipe above the weapon’s crew station and into a chamber called the optical bench. There, sensors determine the beam’s quality, while mechanically controlled mirrors compensate for movement of the airplane, vibration and atmospheric conditions. Precise airflow regulates the chamber’s temperature and humidity, which helps keep the beam strong.

4. Stand Clear
A kind of reverse telescope called the beam expander inside a retractable, swiveling pod called the turret widens the beam to 20 inches and aims it. The laser’s computer determines the distance to the target and adjusts the beam so it condenses into a focused point at just the right spot. Tracking computers help make microscopic adjustments to compensate for both the airplane’s and the target’s movement. A burst of a few seconds’ duration will burn a several-inch-wide hole in whatever it hits.