This morning PopSci’s favorite Jetman, Yves Rossy, strapped on his four-engine rigid wing, took a helicopter up into the skies... 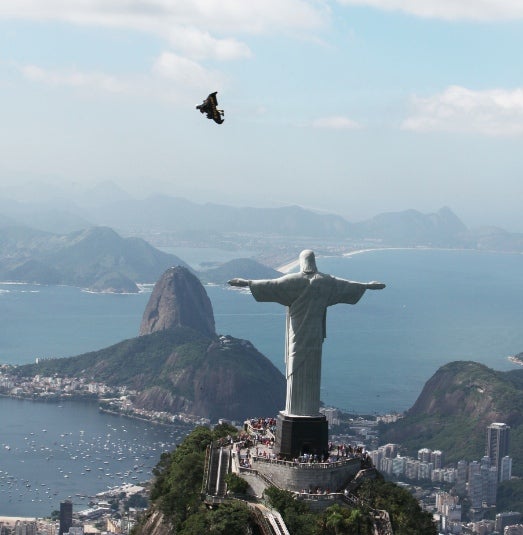 This morning PopSci’s favorite Jetman, Yves Rossy, strapped on his four-engine rigid wing, took a helicopter up into the skies above Rio de Janeiro in Brazil, and once again let it rip. Leaping from the helicopter over Lagoa Rodrigo de Freitas, Rossy zipped around the skies over Rio for more than 11 minutes, taking in some famous Rio landmarks along the way.

Regular PopSci readers know Rossy as the only person to fashion a powered wing to his back that actually allows him to fly–even to climb–independent of any other mechanism. The carbon-kevlar wing, of Rossy’s own design, has already propelled him through the Grand Canyon and across the English Channel–feats that were something more like work. This looks more like vacation.

Moving between roughly 120 and 180 miles per hour throughout the flight, Rossy circled Corcovado (home of the iconic “Christ the Redeemer” statue pictured above) before turning south to snap photo with other well-known locales like Ipanema, Copacabana, and Sugar Loaf Mountain before parachuting directly onto Copacabana beach.