Living in the Future: Multitouch, or How I Learned to Love the Mac

How one small, unobtrusive program totally changed the way I interact with computers 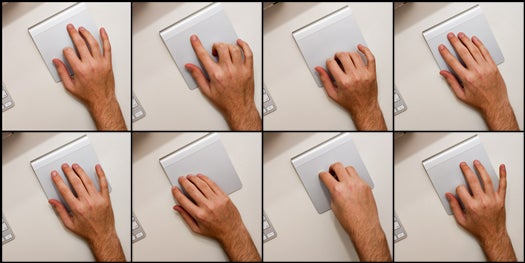 Living in the Future is a new column about those rare moments, as we go about our daily lives, when we realize that what we’re doing is amazing. We have a tendency to assimilate new tech into our lives without giving it much thought, or even without much gratitude, as Louis C.K. reminds us. But every once in awhile, we get that visceral “whoomph” while doing something as mundane as listening to music or playing a video game, and think: “Holy shit. I can’t believe this is possible.”

I haven’t used a computer mouse in three years. That’s all because of an app for Mac OS X called Multiclutch. MultiClutch was a game changer for me, a brief but epiphanic look at the future of computing. The idea: you can map keyboard commands to multitouch gestures. This does not sound like a big deal.

It is a big deal.

I was introduced to Multiclutch about an hour after I’d bought my first Apple product, a MacBook Pro, in the summer of 2009. I bought the MacBook reluctantly, sort of sullenly, convinced I was going to hate it after a lifetime of Windows. I brought it over to a friend’s place to set it up.”Before you do anything else,” he said, “download Multiclutch.” I downloaded, I installed, I configured, and suddenly I got it. This was something different, something better in a basic way.

That’s the way computing is supposed to feel: like a glimpse three years in the future.Multiclutch was really more important in the doors it opened than what it was. It takes the way you use your computer away from keyboard commands or, god forbid, a mouse, which now seem archaic remnants of the past to be filed in a dark room on the shelf next to the floppy disks and the CRT monitors, to the futuristic swipety-swipe of a trackpad. Switching between tabs in a web browser isn’t a CMD-Shift-Bracket anymore, nor do I have to move the cursor up to select the tab I want–I just make this elegant little rotation of my fingers, left or right, and I’m on the next or previous tab. A three finger swipe up is now my universal command replacement for “new” or “open.” (Open a video in VLC? Swipe up. Open a new tab in Chrome? Swipe up.) Swiping left and right goes forward and backward. Swiping down means “close.” It is so natural, so intuitive, so easy. It makes computing with a keyboard and “mouse” feel as sleek and futuristic as a touchscreen.

The feeling of control was totally different from the keystroke-based computing I was used to. It no longer felt like I was commanding an army from far away, typing these directives to be coldly executed on my screen. Instead, it felt like I was actually in control. I wasn’t telling the computer to switch tabs–I was switching tabs. When I swipe three fingers down, I don’t think about “swiping three fingers down,” and I don’t think “CMD-W”: I think about closing whatever I’m doing.

It’s efficient, for many tasks faster than keyboard commands, but that’s not exactly why it feels so good. It’s more about bridging the communication gap between yourself and a computer, breaking down these complex key-related translations and using your hands in the same way you use your hands in real life: gesturing.

When you talk, you gesture. You use your hands to give commands, hurl insults, show appreciation–you communicate, on a basic level–and it’s all instinctive. Other people, assuming they’ve been raised with your particular culture’s gestures, understand you. It can be more concise, more elegant, than using your words. And I came to see multitouch in the same way. I wasn’t using my words, or my keyboard, to instruct my computer on how I wanted it to work. I wasn’t using the old system of mousing, which is reliant on moving a cursor and selecting individual buttons, like flicking switches in an old airplane cockpit. That’s all gone. It’s not a keyboard, and it’s not a mouse. It’s better than both. Why bother with menus, commands, strings of input, or button-clicking when a swipe is so much more natural and universal?

Apple has gone on record saying that the company has no plans to release a touchscreen laptop. It just isn’t practical to use, they say. Apple’s answer, a way to change input so it feels just as futuristic as a touchscreen, is–surprise, surprise–the same idea as Multiclutch. Mac OS Lion, that dumb buggy beast of an update, has many of those gestures built-in, plus some other ones to open Mission Control, flip between Spaces, drag, or look up words in the dictionary.

MultiClutch hasn’t been under active development probably in years, at this point, and isn’t compatible with Lion anyway. I’ve moved to a similar program called BetterTouchTool, which is actually significantly more powerful than either MultiClutch or Lion’s built-in tools. But the specific program is less important than the idea behind it, anyway–I wasn’t excited about a cool new program, I was excited for a totally unexpected way to interact with my computer, and even though I don’t use them, I think it’s pretty exciting that Apple baked this idea right into the OS. That’s the way computing is supposed to feel: like a glimpse three years in the future.