An ultra-fast tiny laser can work as a miniature scalpel inside the body, making careful incisions or excisions while leaving... 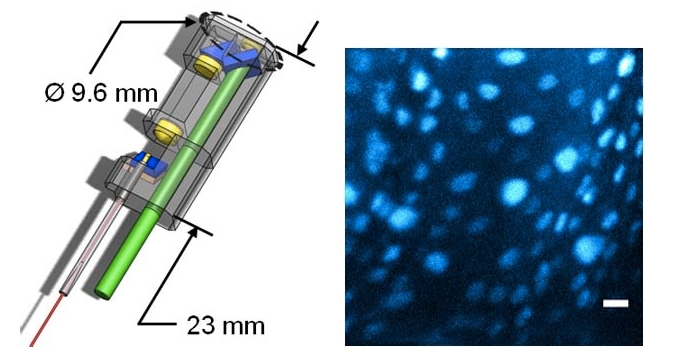 An ultra-fast tiny laser can work as a miniature scalpel inside the body, making careful incisions or excisions while leaving healthy tissue intact. It is more effective than a doctor’s metal scalpel or even other laser devices, according to its developers at the University of Texas, because it leaves more healthy cells alone.

The device includes a femtosecond laser — that’s 200 quadrillionths of a second per pulse — which can accurately target diseased or damaged cells. The endoscope-based device works with two-photon fluorescence microscopy to see individual cells at high resolution, and surgeons can target tissue at the cellular or even nuclear level.

Laser surgery has been around for several years, with clinical applications like the CyberKnife used for precise surgical removal of cancerous tumors. But current laser surgery technology is only so precise, and surrounding healthy tissue suffers, as it does with a typical knife. Tumors in the brain, spinal cord, kidneys and other organs is difficult or impossible with existing laser technology — although there are options for gamma radiation or other treatments. This new prototype could dramatically improve medical lasers’ precision.

It can even fit inside traditional endoscopes, which are used to peer inside the body with a camera. The research team, led by Adela Ben-Yakar at UT-Austin, is treating scarred vocal folds with a probe tailored for the larynx, and completing nanosurgery on brain neurons and synapses and cellular organelles, according to a news release.

The researchers will present their work at this year’s Conference on Lasers and Electro Optics next month.