This three-week-old robot created at the MIT Media Lab’s Mediated Matter group is spinning a web. Or maybe it’s more... 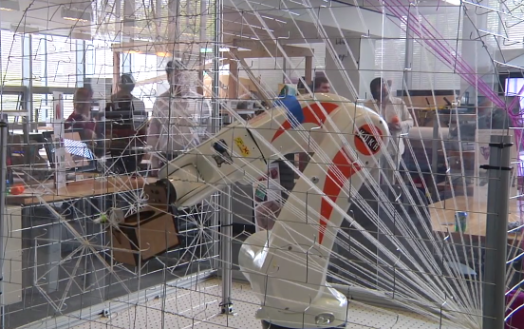 This three-week-old robot created at the MIT Media Lab’s Mediated Matter group is spinning a web. Or maybe it’s more like a cocoon. Whatever you call it, it’s doing so without any help from humans, using tensile materials like string and rope to shroud itself in a woven enclosure of its own creation.

The MIT Media Lab is of course known for its work in 3-D printing and the like, and this project aims to explore the way robots can perceive and alter their surroundings. The robot is currently pre-programmed to know where all the pegs and hooks in its wireframe enclosure are and how to weave a pre-determined pattern around itself. But eventually ‘bot will be made autonomous, with the ability to sense its surroundings, determine the potential to alter it, and then execute its own cocoon design without any interference or assistance from humans.

In other words, the robot would make its own decisions about what’s around it and how it could improve those surroundings, and then set to work altering its environment. Combined with other technologies–perhaps some of that aforementioned 3-D, additive printing technology–it could make for quite a robust robotic platform in which a machine assesses and then optimizes its own space.