Video: A Quadrotor Swarm Puts on a Seriously Psychedelic Light Show at Cannes

The Cannes Lions are generally characterized by lavish parties and ad industry people congratulating each other for, well, being ad... 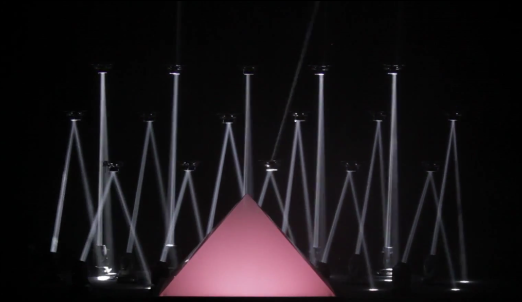 The Cannes Lions are generally characterized by lavish parties and ad industry people congratulating each other for, well, being ad industry people. But it’s also a meeting of creative, forward-thinking media minds, so perhaps it’s about time someone got wise to the robotics revolution unfolding across the globe right now. Front and center at ad house Saatchi & Saatchi’s New Directors’ Showcase at Cannes Lions International Festival of Creativity: a swarm of precisely-programmed quadrotor drones putting on a face-melting psychedelic light show soundtracked by Brooklyn’s Oneohtrix Point Never.

These quadrotors come courtesy of KMel Robotics, the outfit founded by Alex Kushleyev and Daniel Mellinger, both graduates of the University of Pennsylvania’s GRASP Lab, a perennial PopSci favorite where robotics research is concerned (creative direction was provided by Marshmallow Laser Feast, about whom we know nothing but we already like). The first couple of minutes are mostly buildup, so skip forward to roughly the 2:30 mark if you want to go straight to the action. If this purple prism surrounded by an intense quadrotor/light show doesn’t conjure images of Pink Floyd in your mind, you need to spend some time tuning in and dropping out, square.