Video: Micro-Robots Made of Bubbles That Are Powered by Lasers

Roboticists make robots out of all kinds of things, but Aaron Ohta at the University of Hawaii at Manoa makes... 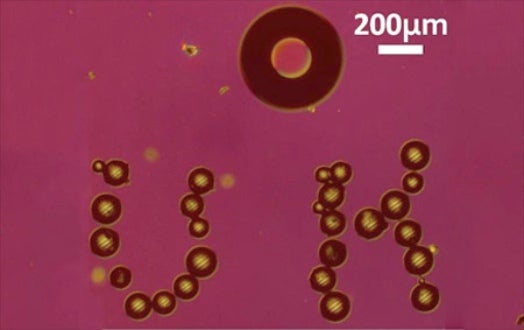 Roboticists make robots out of all kinds of things, but Aaron Ohta at the University of Hawaii at Manoa makes them out of thin air. While we usually think of robots as mechanical, Ohta’s lab has devised a way to make robots out of bubbles of air powered by lasers, IEEE Spectrum reports.

Using nothing more than a fine-tipped syringe filled with air and saline solution, Ohta and his colleagues in the U.H. Department of Electrical Engineering have created a system that uses a 400 mW infrared laser to propel bubbles around their environment. The laser is shone straight through the bubble, where it heats the far side. The solution that the bubbles are in then naturally tries to shift away from the heated side of the bubble toward the cooler side. This transfer of fluid creates a kind of thrust that pushes the bubble in the direction of the heated side.

As such, the bubbles can be used as tiny, micromechanical machines that can perform tasks at extremely small scales. The velocity of the bubbles correlates to the intensity of the laser, so speed can be manipulated by dialing the laser up or down. The spherical nature of the bubbles offers 360-degree control, and because they are literally just bubbles of air in a solution, their size can be adjusted easily and the researchers can make as many as they like.

Unlike other micromechanical machines, which are often controlled by magnetic fields, they are also independently steerable–each bubble simply requires its own laser source. Where a swarm of microbots controlled via magnetism would tend to clump together as they respond to a common magnetic field, the laser-controlled bubble-bots can be steered separately with an array of infrared lasers.

All that allows for finely tuned manipulation at even very small levels. The image above depicts an array of glass beads arranged at a sub-millimeter scale to spell out the University of Hawaii’s initials. With the work completed, cleanup is easy enough: just pop the bubble. You can always make a new machine whenever you need one.