Video: Herb the Robot Butler Microwaves Your Dinner For You

They can fetch sandwiches just fine, but robots can have a hard time cooking meals, with proper pancake flipping a... 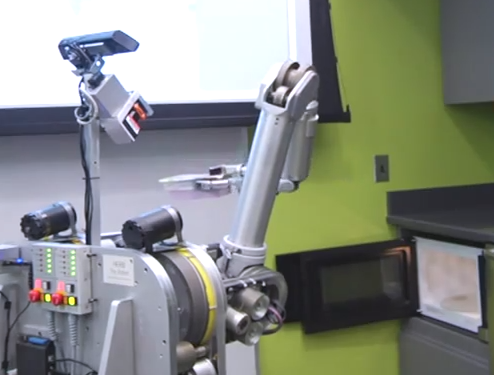 They can fetch sandwiches just fine, but robots can have a hard time cooking meals, with proper pancake flipping a serious and daunting challenge. So why not have them take a decidedly human-like lazy tack and use the microwave instead?

Robotics programmers at Carnegie Mellon University have taught their robot butler to zap a meal. For some strange reason, he uses a normal microwave instead of the spinning lasers embedded in his head.

Herb, the Home Exploring Robot Butler, is designed to bring robotics out of the factory and into the home by testing tasks that a person would want a robot to actually do. Siddhartha Srinivasa’s research group has taught it to complete certain tasks, and they’ve studied how humans perceive its helpfulness when it works properly and when it makes mistakes.

Herb is a humanoid robot built on a Segway platform, which uses spinning lasers that produce 40,000 points per second to produce a three-dimensional view of the environment. This way it can work safely alongside humans and navigate through a kitchen or any other environment designed for people. In the video below, Herb successfully microwaves a frozen entree using the same microwave the CMU Robotics students use. Handy!