Even when it starts out in a nosedive, a leaping lizard uses its tail to right itself, flinging the appendage... 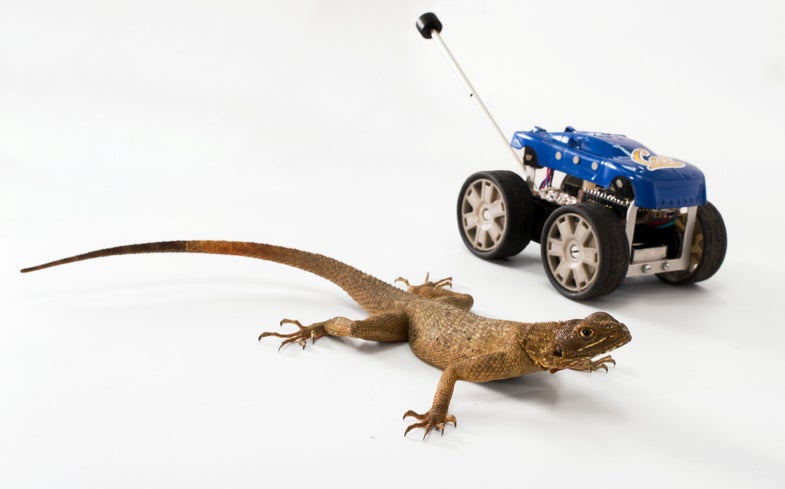 Even when it starts out in a nosedive, a leaping lizard uses its tail to right itself, flinging the appendage to alter its own angular momentum and ensure it lands safely on its feet. Robots can do this, too, using controlled robotails that will guarantee a safe landing, a new study says. So the next generation of search and rescue robots may not be modeled after snakes, spiders or flying creatures, but lizards and dinosaurs.

Like a tightrope walker using a balancing pole or a cat using its tail to perch on a tree, lizards can use their tails to provide external torque, according to researchers at the University of California-Berkeley. They swing their tails upward to prevent themselves from pitching forward. Robert J. Full, a professor of integrative biology, has studied the way geckos use their tails to keep them from falling off vertical surfaces when their feet slip, but this is the first time anyone has studied how tails are used while leaping. The results also support a 1969 hypothesis about therapod dinosaurs like the velociraptor, which may have used their tails as dynamic stabilizers.

Students in Full’s lab watched a lizard recover in mid-air after its feet slipped during a leap, and came up with a stumble study to gauge the importance and use of a tail. The researchers coaxed some red-headed Agama lizards to run down a track, vault off a specific obstacle and land on another vertical surface. But the surface friction on the obstacle varied, so the lizards lost their footing sometimes, flailing out of control. Then the animals would wrench their tails around to right themselves, and come in safely for a vertical landing.

The team created mathematical models to account for the tail motion in three dimensions, and they built a robot dubbed Tailbot to figure it out. Tailbot was basically a remote-controlled car with an aluminum rod at its rear end. The team launched Tailbot off a ramp, inclined at the same angle as the lizards’ vault, and kept the tail rigid. Tailbot plunged down nose-first. Then they used a tiny gyroscope as a sensor to provide Tailbot a sense of its own direction, and programmed the car to swing its aluminum tail in response. They launched it again, the tail swung upward, and Tailbot righted itself, maintaining a nearly constant body angle, the researchers report.

This could be extremely useful in designing robots for use in uneven places, like disaster areas full of rubble. An actively controlled tail, responding to changes in body attitude, could ensure the robot won’t fall on its face and break.

Just to drive their point home, the team tested their math on a velociraptor model, and found it could have used its massive tail in a similar fashion. Given strong enough muscles, it may have been capable of aerobatics beyond those displayed by geckos and other tree lizards, the researchers say. The paper appears in the early online edition of Nature.